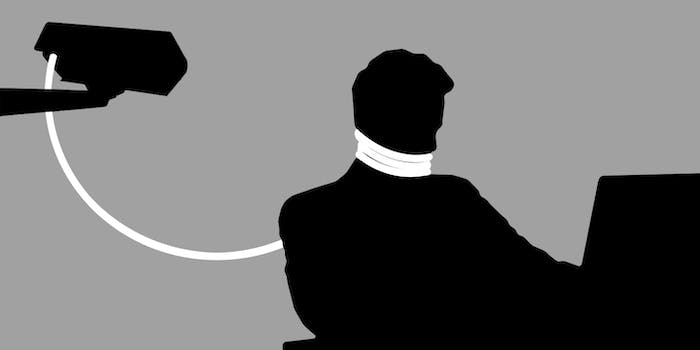 Dot Dot Dot: Caught in the freedom of the Web

The freedom of the Web is its greatest strength and biggest problem. How do we navigate between?

To most people, I think, the Internet and the World Wide Web seem like the same thing.

In fact, the Internet was around for 30 years before the Web was invented. The Internet is the “series of tubes” that connects computers (and TVs, cars, and refrigerators) all over the world. The Web is a format for the information in those tubes.

Think of it this way: The Internet is like the ability to create videocassette tapes. The web is VHS (as opposed to BetaMax).

Like VHS and BetaMax, 20 years ago there were several competing formats for the Internet; the World Wide Web wasn’t even the most popular. Then, on April 30, 1993, something extraordinary happened: the European Organization for Nuclear Research, the organization that owned the format that was the Web, gave it away. They waived any and all intellectual property rights, essentially turning it over to the public domain and giving everyone in the world the right “to use, duplicate, modify and redistribute it.”

Since that moment, the Web has been free in every sense. As they say in the open source community: free as in beer and free as in speech.

That freedom is what makes the Web great. It’s also the biggest problem that the Web community has had to navigate for the last two decades.

The week began with Facebook refusing to censor a grisly video, in which a man, apparently a Mexican gangster, executes a kneeling woman by cutting off her head.

Facebook as a general rule does not allow graphic content on the social network. However, in the case of this video, they said, “People are sharing this video on Facebook to condemn it … While this video is shocking, our approach is designed to preserve people’s rights to describe, depict and comment on the world in which we live.”

Two days later, Facebook removed the video. They didn’t really give a reason for the reversal, but many had pointed out that other beheading videos had been removed, so we can only guess that those complaints swayed facebook’s censors. 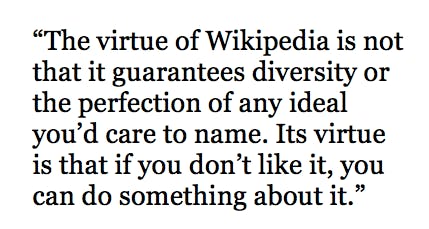 In its previous statement, defending its earlier refusal to censor the video, Facebook said: “Just as TV news programmes often show upsetting images of atrocities, people can share upsetting videos on Facebook to raise awareness of actions or causes.”

And then, two days later, Facebook presumably realized that it is not a news organization, and does not want to be in the business of making the sometime fine distinction between obscenity and news. Really, they’d prefer it if you would just stick to posting pictures of yourself cutting your wedding cake.

If Facebook perfectly represents a rapacious company trying to make as much money as possible from everyone’s trivia end at one end of the Web spectrum, then an equally interesting case of censorship appeared at the other end: the non-profit, crowdsourcing all important human knowledge for the good of humankind end of the web spectrum, i.e. Wikipedia.

Last week, a prominent novelist wrote in a New York Times op-ed that she had discovered that, according to Wikipedia, she was no longer considered an American novelist; she was instead listed in a subgroup called, “American women novelists.”

She objected being relegated to a subgroup based on her gender, and well, most of the Internet agreed. The classification on Wikipedia was quickly reversed.

This week the head of Wikimedia, Sue Gardner, who describes herself as “feminist wikipedian” said the controversy showed that wikipedia was working. While not everything she said in justification of that was exactly what you might call factually accurate, her basic point was right.

The reality is that Wikipedia’s editing is dominated by white dudes just as much as Encyclopedia Britannica’s once was. However Wikipedia’s virtue is that it can and will react to public debate far more quickly and sympathetically than Britannica ever could. The virtue of Wikipedia is not that it guarantees diversity or the perfection of any ideal you’d care to name. Its virtue is that if you don’t like it, you can do something about it.

Then, of course, you’ve got the government of Turkmenistan. After the country’s president fell off his horse at the end of a race (he did win), the country did everything it could to prevent footage of the embarrassing event from getting out, including slowing down the entire Internet in the country.

Their efforts were for naught. The video is still widely available online.

For decades in the West, laws have prevented the government from censoring; the Internet makes such laws practically unnecessary. Try as they might, governments really can’t censor the Internet and World Wide Web.

The impossibility of government censorship is a feature of the way the Internet is built at its very core: a decentralized network without, by definition, any centralized control structure.

True, some companies, such as Facebook, operate important parts of the Web and can censor their own networks. But ultimately the Web’s virtue is Wikipedia’s virtue. Because the Web is free in every way, if you don’t like it, there are plenty of other ways to get your message out. (Think Facebook is just great, but would like it better with obscene content? Try Tumblr.) And if none of those work, you can always start your own.