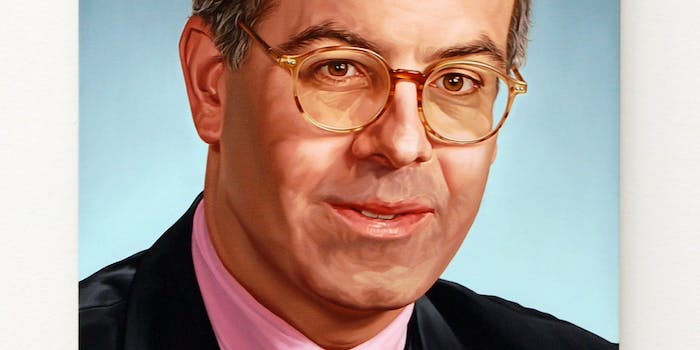 The best fanfic ever written about David Brooks

We all have them: the “sad” lost friend whose bright potential was ruined by—gasp—one too many tokes in high school.

And perhaps we’ve all been them: the loser who embarrassed our cool friends one too many times and got kicked out of our social circles while they went on to greater things and “higher pleasures.”

So it’s easy to see why absolutely no one wants to believe this brilliant Gary Greenberg piece is really satire.

Yesterday, New York Times columnist David Brooks went on an ambivalent crusade against “pothead culture.” The opinion piece drips with whimsical moral musings that feel like they stepped out of a vintage PSA against reefer madness, and does nothing to acknowledge the class and racial factors of the war on drugs.

This absence of class and racial awareness, especially, was probably why Greenberg sat down to compose his effusive response to Brooks’s op-ed. Or maybe it’s just because Greenberg, a psychotherapist and contributing editor for Harper’s and Mother Jones whose writing has appeared in numerous major media outlets, has a soft spot for underdogs.

The conservative Brooks, it seems, had once smoked weed himself as a puerile teen. But while “those moments of uninhibited frolic deepened our friendships,” Brooks writes, he and his friends “aged out” of the desire for weed and into “higher pleasures” like track, science, and “enlargements of the heart,” whatever those are.

Unfortunately, Brooks had one friend who, although smarter than the rest of them, allegedly couldn’t escape the drug’s thrall. Brooks writes that watching his friend’s gradual demise because of the drug may have convinced him to wean himself off weed for good:

We gave it up, second, I think, because one member of our clique became a full-on stoner. He may have been the smartest of us, but something sad happened to him as he sunk deeper into pothead life.

We can picture it: Every year during the holidays, Brooks lines up the Christmas cards he receives from the track star, the science genius, and the large-hearted lovers, and then stares sadly at the empty spot on the mantle where his missing friend’s card would have been, but for pot.

Somewhere out there, perhaps, Brooks’s real-life thwarted genius is using his rolled-up copy of Brooks’s article as a makeshift bong.

But in his absence, Greenberg’s deceptively heartfelt response can speak for him and all the other Mary Jane–loving Steve Miller fans and social pariahs out there:

Funny thing. I didn’t know before this morning that I was the “full-on stoner” who was one of the four  reasons Dave gave up weed. Sorry as I am to hear that our frolics are now his shameful 4 a.m. memories, after all these years of silence, it’s nice to know I mattered to him, that I was a significant part of the moral life of someone so important and with such a strong “sense of satisfaction and accomplishment”—an achievement I guess I made possible by teaching him that “one sort of life you might choose is better than another sort of life.”

And here all along I thought he quit because of that time we got pulled over by the Radnor cops in senior year right after we’d clambaked his Mom’s Vista Cruiser. …

Greenberg goes on to write an amazing—and unfortunately, probably, fictional—account of Brooks’s time in high school. In Greenberg’s fanfic, he and Brooks have a close call with the law, narrowly avoided due to their being “white kids from Radnor,” but the Jewish Brooks allegedly allowed one of his high school’s “only two black kids” to take the rap for his own illegal pot use:

So we were smoking this joint of Jamaican over in that corner and Dave got the bright idea to blow the smoke into the register. “That’ll make everyone up there one of us!” he said. And sure enough when we went up to class the whole floor stank and the vice-principal… went into the boys’ room and dragged out one of the only two black boys at Radnor High, yelling at him for smoking pot in school.

I remember the guilty look on Dave’s face when he saw Mr. Santangelo with the kid by the collar. Later on, he told me that he was tempted to confess, but he also happened to know that that boy did smoke pot, that he was a full-on stoner, so if he got in a little trouble, it might be good for him.  When I read today that Dave thinks that “not smoking, or only smoking sporadically gave you a better shot at becoming a little more integrated and interesting,” while “smoking all the time seemed likely to cumulatively fragment a person’s deep center,” I thought about that boy and wondered if getting kicked out of school had helped him hold together his deep center, and if his going to juvy was the kind of subtle discouragement that Dave thinks governments should engage in when it comes to the “lesser pleasures.” I suppose he thought he was doing the kid a favor by letting him take the rap.

And on the subject of Brooks’s argument that governments should “discourage lesser pleasures” like smoking weed, Greenberg launches a final volley at Brooks’s moralizing:

[L]et’s just say that when Dave wrote this morning that in a healthy society “government subtly encourages the highest pleasures” I remembered a time we were parked out at French Creek and he stood up on top of the Vista Cruiser and gave a speech to us about what Jefferson really meant by the “pursuit of happiness,” and how a government should uphold our right to get as high as possible.

Brooks’s prudish, oddly tentative handwringing had already prompted ridicule from the Internet, still the closest alternative to weed itself if you need brain cells depleted. Twitter coughed up a few parody accounts and generally had a field day with the inanity of his rant:

David Brooks smoked pot once but gave it up for “deeper pleasures.” Probably peyote. http://t.co/2gkIEceWg0

But now the outrage over Brooks’s column has given way to the question of whether Greenberg is actually being sincere or satirical. A look at Twitter indicates that most people are taking the account at face value, despite the tell-tale overwrought humor of lines like “Dave was quiet and pale and barely touched his hoagie.”

And let’s face it, if standing on a car hood rambling about how the founding fathers smoked pot is satirical, then who among us really wants to be sincere?

Whether Greenberg’s piece is satirical or not, the lesson we’ve learned here is one much more valuable than the dangers of smoking pot: Don’t slag off your friends from high school on the Internet—you never know when they might have a blog.