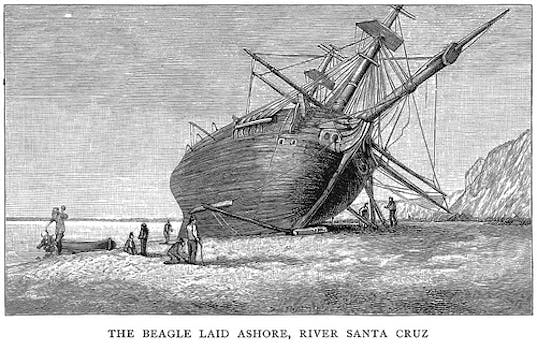 Darwin letters published online reveal the man behind the icon

We know Charles Darwin more as a set of ideas than as a man. The scientist's personal letters, now published online, could help change that.

The Darwin Correspondence Project (DCP) has announced that it will be publishing online 1,200 letters between Charles Darwin and his friend, the British botanist Joseph Dalton Hooker. 300 of these letters have never been published before, according to io9.

The British playwright N.F. Simpson said, “We laugh every time a person gives us the impression of being a thing.” And no one has been more reified than Darwin. He has devolved from a man into a thing, a flag or an idol depending on your religio-political affiliation. At best, he’s a set of ideas. But to his family and friends, he was, to use comedian Sean Cullen’s phrase, “a human man.”

This set of letters, and the DCP in general, may contribute not just to a more complete understanding of the theory of natural selection, but to the rehumanization of the man behind it.

As the DCP’s Alison Pearn writes, these letters “are a connecting thread that spans forty years of Darwin’s mature working life from 1843 until his death in 1882, and bring into sharp focus every aspect of Darwin’s scientific work throughout that period.”

They  “illuminate the mutual friendships he and Hooker shared with other scientists, but they also provide a window of unparalleled intimacy into the personal lives of the two men.”

One of the most astonishing, and heart-rending, was one which Hooker wrote to Darwin only hours after his six year-old daughter, Maria, had died. Darwin had suffered the loss of his 10-year-old daughter and an infant son.

“My darling little 2d. girl died here an hour ago,” he wrote, “& I think of you more in my grief, than of any other friend. Some obstruction of the bowels carried her off after a few hours alarming illness—with all the symptoms of strangulated Hernia.”

At another point, Darwin shared his grief with Hooker over the loss of his daughter-in-law during childbirth.

“I am sure you will pity us,” wrote Darwin, “when you hear that Amy, Frank’s wife, was safely confined & was going on apparently quite well, when she was seized with convulsion which lasted for several hours, she then sunk into a stupor & I saw her expire at 7 oclock this morning. She was a most sweet gentle creature, with plenty of mind beneath, & they were most happy together. No pair could have been happier. Thank God she had no suffering & never knew that she was leaving Frank & all of us for ever. I cannot think what will become of Frank. She helped & encouraged him in his scientific work & whether he will ever have heart to go on again or what he will do I cannot conceive. My dear old Friend I know that you will forgive me pouring out my grief.”

There is plenty of joy and a great deal of scientific speculation, of course. But these two letters do bring the scientific practice of some history-making minds down to a commonality that we can all feel.

Just as Darwin’s work collapsed a great deal of the Victorian certainties that powered a vital, but extremely hierarchical society, so the Web sometimes democratize information, at least among those with the money, technology and connectivity to access information online.

Whether you celebrate it or decry it, it’s always fascinating to watch the prerogatives of any priesthood degrade before your eyes. Our ability to look directly into the real lived life of Darwin online makes him more of a man, with recognizable loves, fears and mental processes, and less of a God, and therefore reduces the need for intercessory experts.