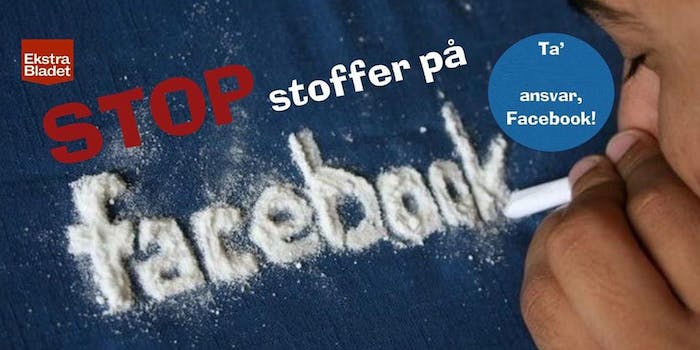 He thinks Facebook should be held accountable for how users choose to use the site.

Facebook is a site for friends and family to gather around the cyber fireplace and share their favorite stories, Like comments, and watch hilarious videos. But for one Danish man, the social media site has become a hotbed of dangerous drug activity, and it’s finally time to take out the trash.

According to the Danish news site Online Post, Horsens man Gert Fruelund Jensen called the cops on Facebook, the largest global social network, for a role it plays in drug trafficking. To Fruelund, it is far too easy to get drugs on the site.

“I am mainly angry about it because I have four children between 16 and 20 years old,” he told the Online Post, “and I have seen young people perish due to drugs.”

Fruelund added that Facebook should be held accountable for how users choose to use the site. “If a food producer becomes aware that its product made someone sick, they are obliged to report it to the authorities,” he said. But Facebook, a seemingly unstoppable Internet behemoth, doesn’t feel culpable of anything, according to the Danish lone wolf.

Whether or not the police can arrest Facebook or its chief executives has yet to be determined, but Fruelund hopes they, along with authorities, will take this matter seriously.

An investigative documentary called The Hunt: The New Pushers, released by the Danish TV3 examines the deaths of young people who have died after taking synthetics allegedly acquired via closed groups on Facebook. “Gone is the notion that drug dealers are suspicious men in [Copenhagen],” the summary says. “Now all young people are potential sellers and buyers of synthetic drugs that nobody really knows the strength.”

Danish detectives probably aren’t flashing their sirens all the way to Menlo Park, California, but Fruelund and his supporters certainly think Facebook should do something to shut down these apparent closed groups. And nobody wants to see Facebook go to the social media slammer.

H/T Online Post | Photo via No drugs on facebook/Facebook