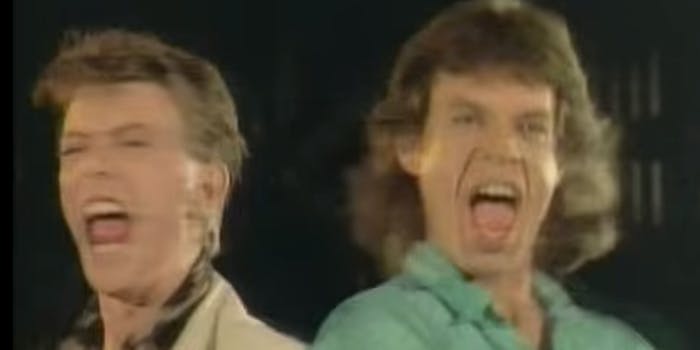 Mario Wienerroither hits another one out of the park.

The clip, taken from 1985 remake of the timeless Martha & the Vandellas jam, finds the British bards shuffling their feet in a stairwell before stepping outside and dancing (!) in the street. Their twirls, whirls, and pirouettes come accompanied by shoe shuffling, faint laughter, and a couple cat calling whistlers.

And a burp, from the Rolling Stones legend Mick Jagger, at 0:35.

No telling if this Musicless Musicvideo will eclipse the view total of his Wienorroither’s latest video, a four-minute remake of the movie Nosferatu that’s picked up 5.9 million views in just six days. “Dancing in the Street” does already have some 160,000 views, though, and it only posted to YouTube Wednesday.

Prior to this week, his most popular clip had been the Musicless Musicvideo for the Prodigy’s “Firestarter,” which we loved, and the one he made for Shakira’s “Can’t Remember to Forget You,” which was horrible.