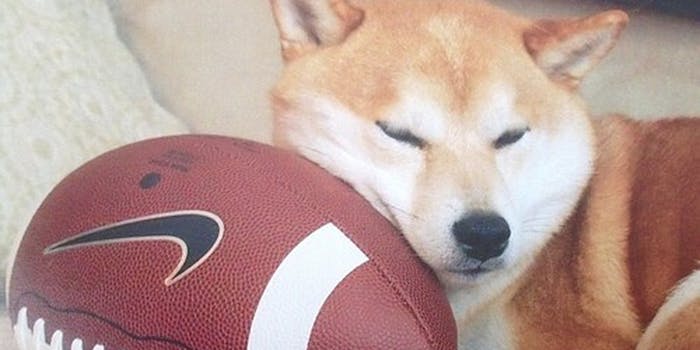 Sparky the shiba inu won coaches over with his agility.

Those looking forward to this weekend’s “Manning Bowl III” will be disappointed. According to ESPN reporter Tim Schecter, the New York Giants will replace starting quarterback Eli Manning for Sunday’s upcoming game against the Denver Broncos with a puppy named Sparky. The Broncos offense is led by Eli’s elder brother Peyton.

According to Schecter, Giants coach Tom Coughlin confirmed the move.

“I know it looks like he’s asleep,” Coughlin told Shecter of the dog, “but he’s a great passer and can get down the field in a hurry. We can do some really interesting things lining him up at running back, too.”

When asked why the Giants would take the unusual step of signing a relatively unknown — and non-human — player out of an independent league instead of using Curtis Painter or Ryan Nassib, who are already on the roster, Coughlin said it was a matter of agility.

“You saw how much pressure the Broncos pass rush put on the Ravens last week,” he said. “Sparky can really move around in the pocket. He runs a four three 40 and reads defenses like a champ.”

Eli Manning is coming off a disappointing week one performance, in which he threw 3 interceptions, while his older brother had a brilliant 462 yard, 7 touchdown game to start the season. This would have been just the third time that the two Mannings had met on the field.