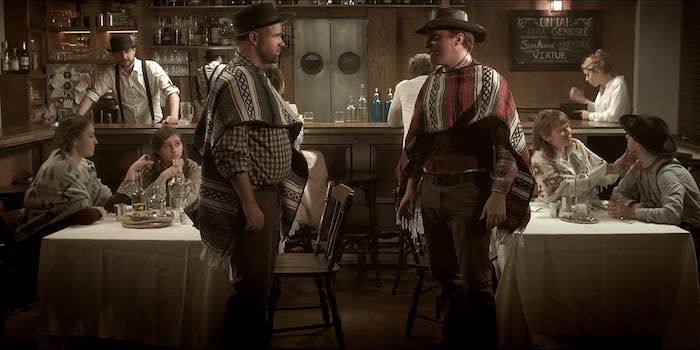 Two masters of the craft walk in—and two leave, but before they do, there are lots of puns.

It’s a pun-off for the ages, and all we can do is groan.

The dad joke is an art form that requires intense practice master, and if someone else is encroaching on your turf with the same material, you’ve got to do your part to defend it. In the video below, two neighbors and dads whip out their finger pistols (and their best artillery) as a pun-off turns into an old-fashioned Western bloodbath.

Their wives and children aren’t amused, but at least these dads can’t use the “Hi Amused I’m Dad” joke ever again.

Really, though, why do they have to fight? Each of them has finally found someone else with his own sense of humor. Their respective families don’t appreciate their humor, so they should cling to someone who does. Instead of of a metaphorical pissing contest, why not join forces? They’d be stronger together than they ever were apart.