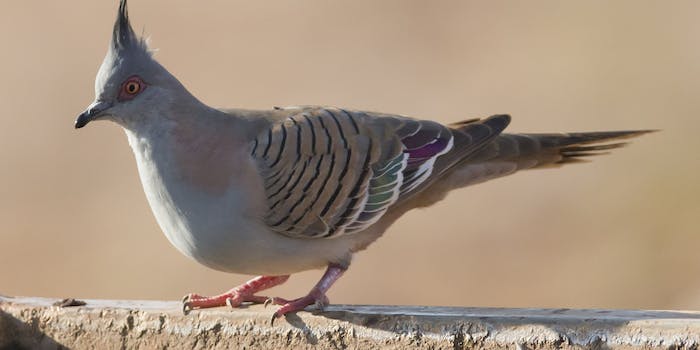 This pigeon is trying to seduce its owner

“No, pigeon. Breeding with me would be counterproductive."

As anyone who’s ever owned a dog knows, animals sometimes try to hump things that have no business being humped. But most of us have probably never had to deal with similar friskiness from something with wings.

Not so for the woman in this video, who is being hit on by a pigeon harder than Scarlett Johansson at a pick-up artist conference.

“No, pigeon. Breeding with me would be counterproductive,” as the woman says in the video, might sound like a perfectly nice way to turn someone down. (Even if that someone is a very fancy bird.) But it is also woefully ineffective—the randy pigeon still bum rushes her.

Of course, this bird lover probably saw this aggressive advance a mile away. This isn’t just your average rat-with-wings pigeon after all. Instead, it appears to be a Crested Pigeon, known, according to Wikipedia, as being “highly gregarious” when it meets humans.