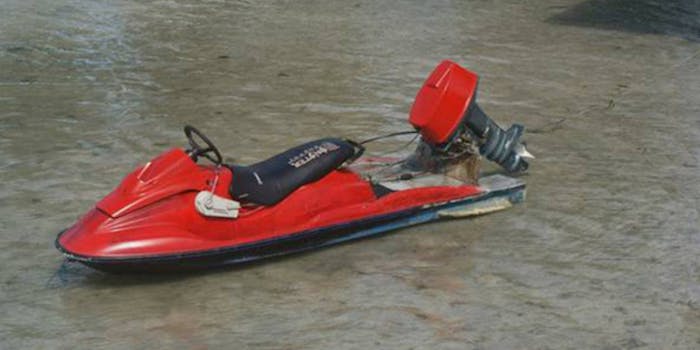 Sex sells, and a Craigslist user in Memphis, Tennessee has made it abundantly clear that if you buy his jet ski, there will be carnal knowledge in your immediate future.

The item for sale is a 1984 Kawasaki X2 with an 18 horsepower outboard motor. The “sumbeech will fly,” which means it moves very quickly over water. Apparently there’s the hidden feature as well: If you “float up to the beach on this bad boy,” the owner maintains that “the hoes will flock.”

The jet ski’s allures are purportedly so strong that women are willing to remove their clothing to ride it. But “if the girl doesn’t take her top off, that’s okay ’cause the wind will blow it off for sure.”

This piece of shit is available for $350. (The jet ski, not the human being.) Here’s the full text of the ad, which has since been flagged for removal from Craigslist:

1984 Kawasaki X2 with a 18 horse outboard johnson. Sumbeech will fly. Nicknamed the honey hauler for a good reason. Float up to the beach on this bad boy and the hoes will flock. Happens to me every year. Every summer it’s the same old thing, give me a ride they say.. “I’ll take my bikini top off” they say, but it doesn’t end there. Will this 1984 saki powered by a 18hp two stroke johnson you’ll feel like breaking bad mixing the oil and gasoline. Plus that extra seat and power means you can load this baby up with all the biggest beach whales without lag… (Trust me, I know.)

This wave slammer hauls!! If the girl doesn’t take her top off, that’s okay ’cause the wind will blow it off for sure. 40 year old virgin? Girlfriend of wife cut you off at home? No problem. This is the ship for you, mate. Built in 1984 the engineers had poon magnet clearly spec’d on the buildsheet. This ain’t no fishin’ boat but it’s been hauling pink-snapper for years. This is a bachelors dream right here and you wont find a better price for this mini-yacht – one easy (reduced) payment of $350. I hate to see her go but it’s time to let some other guy take this gem down to tuna town.This boat will make her wet guys… My loss is your gain.

2014 ‘drill-kota’ included – hand crafted by yours truly. (Made in America)