It turns out you can't just sell an entire human skeleton over the Internet.

An Iowa man who listed a coffin for sale on Craigslist had his plan thwarted when police stepped in to temporarily cancel the sale.

Authorities learned that the coffin actually contained a set of human bones—enough to amount to a full skeleton—that had been inside the oak casket for what might have been decades.

Council Bluffs elder Dave Burgstrum posted a listing on Craigslist last week advertising an “Oak coffin on stand,” a 7-foot casket built in the 1900s that he hoped to exchange for $12,000—money that would go towards property taxes he had to pay in order to maintain ownership of the the Independent Order of Odd Fellows hall, the organizational facility for the a fraternal council that anonymously donates money to the poor. 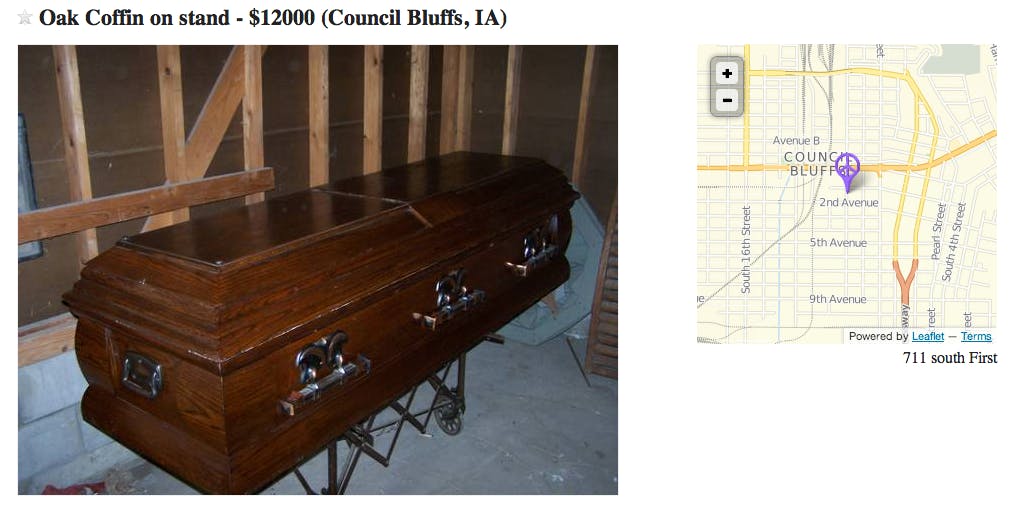 Burgstrum advertised the coffin on Craigslist with a caveat: all contents of the coffin were included in the sale. The amendment raised some eyebrows with those who came across it, and it led Council Bluffs police to investigate.

When authorities arrived at Burgstrum’s door, they quickly learned that those “contents” were actually skeletal bones, something that cannot legally be sold or privately owned without proper identification tags. They removed the bones and sent them off to Karen Foreman, the chief investigator for the Pottawattamie County medical mxaminer’s office, who in turn sent them to the Iowa State medical examiner’s laboratory for proper identification.

Back in Council Bluffs, Dave Burgstrum maintains that he’d like to sell the coffin. In fact, he had no intention of using the skeletal bones as a selling point; he simply had no other places to put them.

“What do you do with them?” he asked a Southwest Ohio News reporter. You can’t throw them in the trash or bury them. [The medical examiner] can keep them and I’ll be done with them.”

He added that the coffin will remain up for grabs.