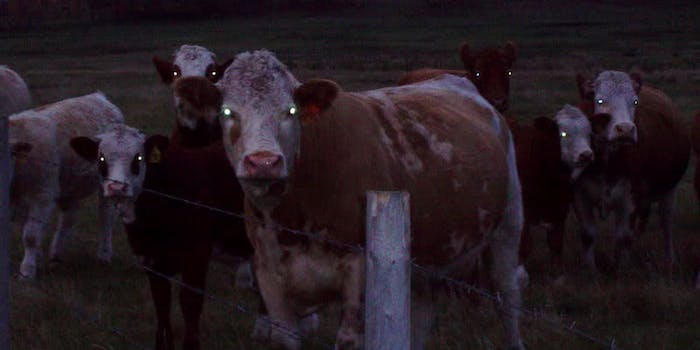 We're all being watched.

There’s a reason to fear cows other than just mad cow disease and the chaos of a cattle stampede. Cows are the silent jury in the trial of mankind, and there’s a whole Facebook page devoted to their surveillance.

With some 9,600 likes and steadily growing, the page doesn’t offer too much explanation about the tribunal of hoofed beasts. There’s no fleshed-out description, just two pictures, and the timeline is just full of repeated posts that say only this: “Cows are the Silent Jury in the Trial of Mankind.”

The page has been around since 2013 but has seen a spike in popularity over the past couple of months—probably thanks to a screenshot posted to Tumblr by gotitforcheap that has racked up over 156,400 notes.

Jay Brunner, the man behind the page, actually credits his friend Tyler Magill for coming up with the saying a couple of years back. Brunner thought it had a catchy ring to it and made the page to play with his friend, never thinking it might become more than a humorous stunt.

“I never really thought of it as an animal rights sort of thing, I enjoy the much more sinister notion of the cows just judging us, and their day of reckoning will come soon,” he joked in a message to the Daily Dot. “I think vegan/vegetarians caught onto it also, and it grew among their groups.”

Posting the same status over and over actually originally derived from a lack of inspiration in the page’s early days. But Brunner noticed that it caught on, with the people repeating it in the comments. He might consider himself a lazy content creator, but the repetition really struck a balance between the eeriness and eccentricity of the page.

Brunner also took a pretty relaxed approach to the selection of cow pictures, having picked them out drunkenly online in the span of about three seconds at 1am.

“I just looked for spooky pictures of cows staring at the camera,” he wrote. “If anyone has any better ones, feel free to send them to me. Pictures you took of cows yourself are even better, then I don’t have to worry about those dastardly copyright laws if you give me your approval.”

And if you’re looking to get your pictures of cows on the jury, send them Brunner’s way. When asked why cows get to to be the silent jury of mankind instead of some other animal, Brunner argued that there’s really no other creature possible. He suggests that you stare deeply into a cow’s eyes sometime if you’re at all unsure.

He also wants people just accept their fate and moo-ve on with it. Mankind needs to go with whatever verdict the cows ultimately settle upon.

“There is no point in fearing the inevitable. What’s coming is coming, and your fears and hopes won’t stop the boulder coming down the mountain to judge and smash you,” he teased. “I really never thought this many people would like the page, so it’s just a hoot for me, really.”

Brunner really is milking the page for all the laughs it can get.