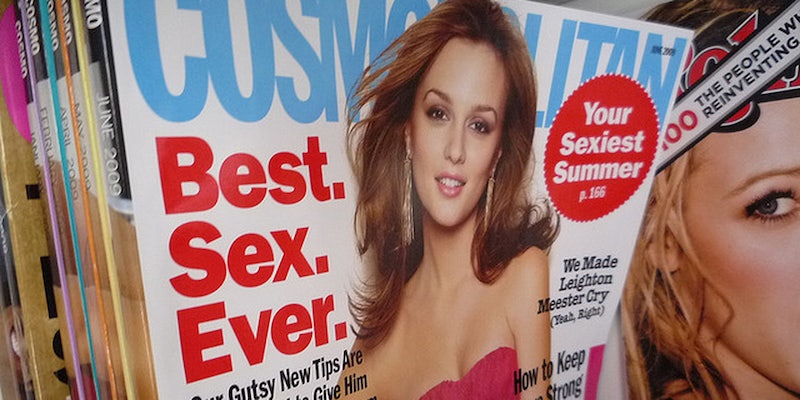 It’s Cosmopolitan vs. Reddit in the battle for sex-tip supremacy

Cosmo has challenged Reddit to some sort of sex-tip duel. At least Reddit seems to think so.

Whenever someone mentions magazine or Web sex tips, I always picture some misguided young girl putting peanut butter on her confused boyfriend’s balls. How could anyone take anything like that seriously, let alone think it’s sexy?

On opposite spectrums, Cosmopolitan and Reddit seem to take their different versions of sex advice very seriously. And Cosmo has challenged Reddit to some sort of sex-tip duel. At least Reddit seems to think so.

In an article on the magazine’s website, titled The 9 Guys You Must Hook Up With in College—and Then Never Again, writer Anna Breslaw makes a flippant reference to Reddit’s plethora of shady sex advice under the heading of “Ultra Nerd.” Some redditors do not like it. This long thread called “Oh the sweet, sweet irony. Cosmo criticizing Reddit about giving sex advice” is filled with redditors furious that Cosmo, whose own sex advice is so ridiculous there’s a subreddit dedicated to mocking it, would pick Reddit as a target.

(To be fair, I both use Reddit and write articles for Cosmo, though I don’t give or read sex advice on either.)

In response, the Atlantic Wire came up with a brilliant quiz game called “Can You Tell the Difference Between a Cosmo Sex Tip and a Reddit Sex Tip?” I scored pretty well, only confusing Cosmo for Reddit a few times.

Take the quiz here and see if you can tell the difference between sex tips geared toward women by women’s media and sex tips written for a gender-neutral crowd by presumed “nerds.” The answers might surprise you.