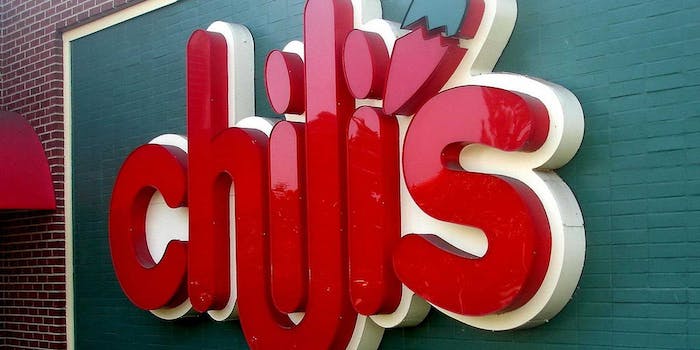 If you’re a cop, Chili’s has your back.

Ashley Warden of Piedmont, Okla., was fired from her waitressing job at a local Chili’s restaurant for posting a picture of three Oklahoma County Sheriff deputies to her Facebook page along with a less-than-favorable comment.

For those unfamiliar with late 80s hip hop, FDP is a reference to a very popular N.W.A. track that lambasts cops for a multitude of reasons, including racial profiling and unwarranted police brutality.

According to local outlet News On 6, Warden’s post went viral amongst law enforcement sites. The waitress’s remarks eventually made their way to Chili’s, and she was promptly fired.

“With the changing world of digital and social media, Chili’s has Social Media Guidelines in place, asking our team members to always be respectful of our guests and to use proper judgment when discussing actions in the workplace,” Chili’s wrote in a prepared statement obtained by the Daily Dot.

“When we find that team members violate these policies, they are subject to termination. After looking into the matter, we have taken action to prevent this from happening again.”

The same statement also stressed that the restaurant chain prides itself on its partnership with local law enforcement officials.

It’s worth noting that back in November 2012, Warden had an unpleasant experience with local police. A Piedmont police officer gave her a $2,500 ticket because her toddler had peed in public. By Piedmont Police Chief Alex Oblein’s own admission, the officer in question handled the situation poorly and was subsequently fired.

But now it appears like Chief Oblein is reveling in the schadenfreude.

“Those are Oklahoma County deputies, [they] had nothing to do with Piedmont, but I guess she got a bad taste in her mouth for law enforcement in general,” he told KFOR-TV.

On Facebook, the news of Warden losing her job has been greeted with celebration on pro law enforcement pages.

The moral of the story here is that if you work at a place like Applebee’s or Chili’s, your best bet is to stay away from social media entirely.