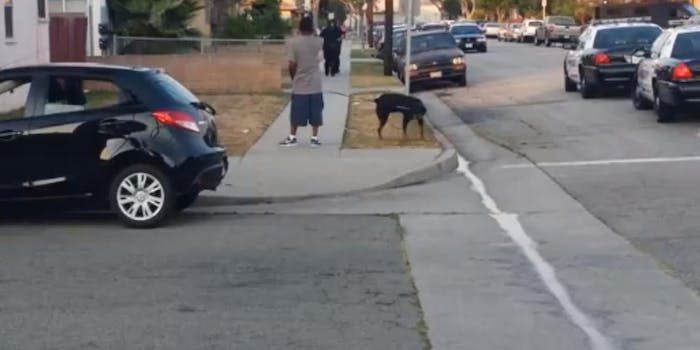 77,000 outraged netizens want to charge these cops with animal cruelty

A horrifying video that made the rounds this week inspired a popular petition.

In a horrifying video that made the rounds this week, a Hawthorne, Calif., police officer fatally shoots a Rottweiler four times in front of the dog’s owner, shocking onlookers. Outraged, the Internet started a petition to charge the officer with animal cruelty.

Outlets such as New York magazine report that police asked the owner, Leon Rosby, to turn down music coming from his car because it was interfering with an investigation. When he refused, cops handcuffed him. His dog, Max, saw this happening and jumped from the car to bark at the officers. The cop then shot the dog four times, leaving him twitching and dying in the street. A group filmed the entire interaction from their car, and in the video you can see Max suffering and whimpering while his handcuffed owner looks on.

The petition, by Stop Police Brutality, claims Rosby was filming the cops as they investigated a house on the street and that the music was coming from another car. “He was not breaking any laws,” the petition says. “He was illegally arrested and then his dog was shot.”

The petition currently has more than 76,000 signatures. It asks the U.S. Congress and the Hawthorne Police Department to prosecute the officer who shot and killed Max.

According to the Daily Breeze, the three officers involved have been pulled from street duty today because they’ve received threats from the community following the video of the shooting going viral. The original video now has more than 3.7 million views.