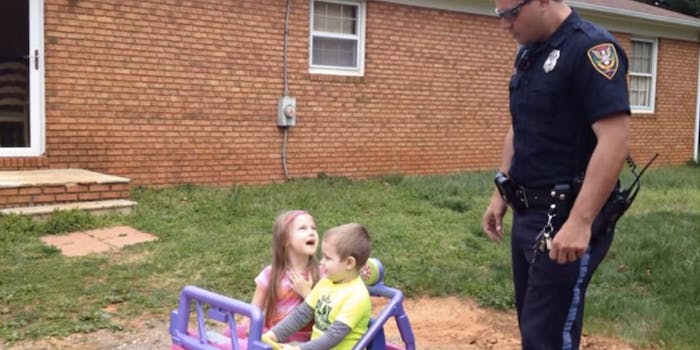 It's sad when small children turn to a life of toy-enabled crime.

Below is a clip of Roanoke, Va., police officer Kenny Bowman horsing around at home with his kids, Blake and Rylee. But what started off as a fun videotaped moment for family and friends turned into a high-stakes, high-speed chase, and has since gone viral on social media.

“I just came home one day after work, still had my uniform on, and they were playing with Rylee’s Power Wheel, and I thought it would be fun to do a ‘traffic stop’ on them for Facebook friends and family. I had no idea that it was going to reach so many people,” he told Inside Edition.

It would appear that Officer Bowman is a moderately active YouTuber, so it’s curious that this video of him chasing a wild bird didn’t go viral first.

And here he is performing “Baby Got Back.”