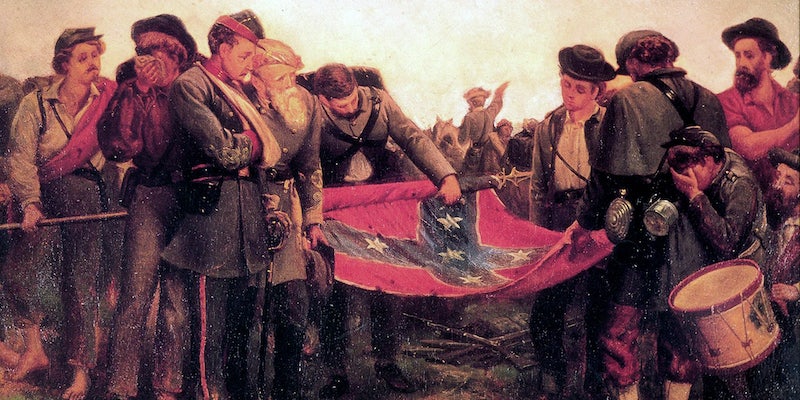 You lost the war. Flying the flag at this point is just petty

Last week, the United States witnessed yet another outburst of mass violence when nine people were shot to death at a historically black church in Charleston, S.C.—a church with a troubled past of experiencing violent hate crimes. The alleged perpetrator, Dylann Roof, was clearly linked to the white supremacist movement, and racism was a strong motivation in the carefully planned crime.

In the wake of the shocking act, the Confederate flag still flies high and proud at the state capital, while the American and South Carolina state flags have both been lowered to half-mast. This has not escaped notice on the Internet.

The Confederate flag is, undeniably, the flag of an apartheid state. It always will be.

The fact that South Carolina couldn’t lower or remove a flag intrinsically associated with racism out of respect to the victims of a racist hate crime is a telling testimony as to the stranglehold racism has on America.

In a searing monologue about the shooting, the usually lighthearted comedian Jon Stewart turned darkly serious.

Criticizing the presence of the flag—which threw salt in the wounds of a community struggling to come to terms with an act of brutal racially motivated violence—Stewart noted:

Nine people were shot in a black church by a white guy who hated them, who wanted to start some kind of civil war. The Confederate flag flies over South Carolina, and the roads are named for Confederate generals, and the white guy’s the one who feels like his country is being taken away from him.

A sordid tale lies behind the decision to keep flying the Confederate flag, and picking apart the threads of that story illustrates just how difficult it may be to get the state to change its policies on the subject. While Governor Nikki Haley was criticized for claiming that she couldn’t do anything about the situation, she was actually right about one thing: The decision to do away with the flag at the state’s capitol isn’t under her control, but it should be.

The right to free speech is ardently protected in the United States as a key American value, but the right to government speech actually isn’t. Individual government agencies, states, and other authorities aren’t required to offer what’s known as a “neutral viewpoint,” and with good reason. Otherwise, schools would be required to offer white supremacist propaganda alongside diversity programs, for example, or the DEA would be obligated to present pro-methamphetamine PSAs in conjunction with programs fighting the highly destructive drug.

Sometimes the claim that we need to show both sides, or present “fair and balanced” information, rings hollow. When one side promulgates hatred and perpetuates inequality and injustice, the government isn’t required to endorse it; in fact, supporting such speech could potentially be considered a violation of civil rights.

There’s an established legal doctrine surrounding government speech, making it clear that the government can pick and choose what it supports, tacitly or explicitly. South Carolina would be required to protect the rights of KKK members to march down a public street, but it shouldn’t be obliged to host a Confederate flag on the grounds of the capitol—except that, in a totally bizarre and mind-boggling twist, it actually is.

One hundred years after the Confederacy was soundly beaten in the Civil War, South Carolina began flying a Confederate flag at the capitol building in a profound act of pettiness directed at the burgeoning civil rights movement. In the subsequent decades, the flag became a bone of contention: Advocates argued that it was “celebrating Southern heritage,” while opponents insisted that it was promoting racism.

Idea: if you still fly the Confederate Flag, you're not allowed to use any technology or medicine invented later than 1865

"Fellow Republicans, if you insist on name-checking me all the time, how about getting rid of that Confederate flag?" – Abraham Lincoln

Writing on the subject of the “heritage” argument in the wake of the shootings for the Atlantic, Ta-Nehisi Coates articulated the trouble with history:

In 2000, the flag was finally removed, but there was one catch. After being taken from the capitol building, the flag was installed on a Civil War memorial directly adjacent to it, and the flag is permanently affixed to the pole. Unlike other flag installations, in other words, it can’t be raised and lowered. Think of those little American flags on toothpicks they stick on cakes, only with more racism.

Moreover, it would take an act of the state’s General Assembly to change the policies surrounding the flag. Any bill to repeal the very precise language of the decision to keep the flag on the grounds of the capital needs to pass by a two-thirds majority in both houses. The “compromise” that allows the flag to continue to fly is nearly impossible to revoke without substantial traction and social change in South Carolina.

That seems unlikely to happen, given that South Carolina happens to be among at least nine states that still has Confederate flag license plates—like those Roof had on his own vehicle—and paired with a disturbing culture of racism. Roof didn’t grow up in a vacuum, and the state’s own governor doesn’t seem to see a problem with flying a symbol of racism at the capitol. In response to criticism in 2014, she claimed it was a nonissue with businesspeople she spoke to on a routine basis while conducting government business and, therefore, evidently not a concern.

“Given that less than 1 percent of Fortune 500 CEOS are black (compared with 28 percent of South Carolinians),” Mother Jones wryly comments, “they may not be the best focus group.”

The Texas legal decision marks a rare instance in which a conservative state government invoked the doctrine of government speech to decline to support racist propaganda on government property—in this case, license plates. It lays the groundwork for a clear legal precedent that other states can and likely will take advantage of, as civil rights groups and other organizations may take advantage of the majority opinion to fight other license plates with dubious designs.

In the five to four decision, Justice Stephen Breyer wrote that:

A person who displays a message on a Texas license plate likely intends to convey to the public that the State has endorsed that message. If not the individual could simply display that message in question in larger letters on a bumper sticker right next to the plate. But the individual prefers a license plate design to the purely private speech expressed through bumper stickers. That may well be because Texas’s license plate designs convey government agreement with the message displayed.

His opinion addressed the fact that while Texas has a program welcoming civilian designs for license plates, it’s not required to accept all proposals, though this is the first time the state has rejected one. The dissenting opinion attempted to argue that this was spurious, providing some examples of plates some might deem frivolous or offensive that had passed muster. Notably, one such plate included a “come and take it” flag, referencing gun rights, another darling cause of the white supremacist movement.

It would appear that Texas, at least, is slowly moving in a different direction when it comes to displaying the controversial flag in association with the government, and even Jeb Bush managed to have the Confederate flag taken down in Florida. The suit could potentially pave the way for more legal challenges in the case of states like South Carolina that resolutely refuse to acknowledge their racist past and instead prefer to wave the stars and bars like a loogie in the face for those who suffer the daily consequences of racism.

Private individuals are more than welcome to display the Confederate flag should they have a desire to advertise their racism, but it’s time to stop pretending that government offices and agencies have an obligation to keep fighting a war that’s 150 years dead. It’s over. You lost. Move on.