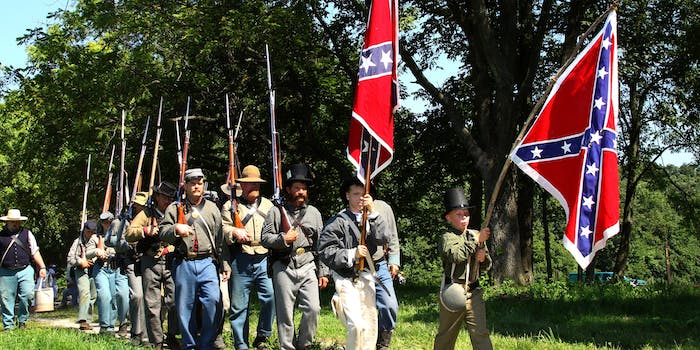 Charleston and the white denial of racism

South Carolina Gov. Nikki Haley called for the removal of the Confederate Flag from the State House Monday afternoon. The decision came after Haley faced mounting pressure from activists, politicians, and Mitt Romney to do so. “That flag,” she said, “while an integral part of our past, does not represent the future of our great state.” The governor added that Dylann Roof, the white 21-year-old who committed the act of terrorism that claimed the lives of six black women and three black men, ”has a sick and twisted view of the flag.”

To Haley, the “stars and bars” weren’t so much a symbol of centuries of black subjugation in the South as they were a symbol of South Carolina’s somehow-not-racist cultural history—a “heritage” that does not allow black people. It is a “symbol of respect, integrity, and duty,” according to Haley. It’s a “way to honor [their] ancestors who came to the service of their state during time of conflict.”

Roof’s views, however, are consistent with the basic ideology of white supremacy that purports the inferiority of non-white races. “[B]lacks are subconsciously viewed by White people are lower beings [sic],” Roof wrote on his website. “They are held to a lower standard in general. This is why they are able to get away with things like obnoxious behavior in public. Because it is expected of them.”

In his Facebook photos, he pays tribute to the Confederate States of America—the failed nation-state the flag represents—and he wore a patch commemorating the flag of the Republic of Rhodesia, the unrecognized white minority state that formed in 1965 in what is now Zimbabwe.

The very basis of the Confederacy’s existence was based on the enslavement of African-Americans. (Ta-Nehisi Coates meticulously outlined this history in a recent piece for The Atlantic.) What, then, does the Confederate Flag represent if not white supremacy?

#NotAllWhitePeople are racist, #NotAllMen are misogynistic, #NotAllCops abuse their power. But apologists who fail to recognize the systems of power at play are complicit in their reinforcement.

The omission of this basic fact about the South’s Confederate past and nostalgic present dismisses the experiences of the black population in southern states, who were enslaved and terrorized in the name of white supremacy. It also suggests that the massacre at the Emanuel African Methodist Episcopal Church was an outlier, the actions of a “deranged individual,” and not the product of a white supremacist ideology maintained by the state’s embrace of its Confederate heritage.

Salon reported the nearly immediate emergence of defensive tweets all but declaring #NotAllWhitePeople. The hashtag itself didn’t appear to be tied to many of the tweets made either in support or dismissal of the massacre; instead, it became a pejorative shorthand for the inevitable response from members of the white community.

Move on until it happens again, in the next few weeks or months yeah? #NotAllWhitePeople guys… https://t.co/9wC8etCsJp

As is the case whenever a member of a hegemonic group (white men) inflicts violence on marginalized people (people of color, women, the LGBTQI community), “innocent” members of the group—that is, members who hadn’t committed such acts of violence and don’t actively engage in oppression—come out of the woodwork and separate themselves from the perpetrators of violence.

#NotAllWhitePeople are racist, #NotAllMen are misogynistic, #NotAllCops abuse their power. But apologists who fail to recognize the systems of power at play are complicit in their reinforcement.

In her essay, “White Fragility,” Robin DiAngelo describes this defensiveness as a symptom that stems from white people “[living] in a social environment that protects and insulates them from race-based stress.” The stress, she suggests, results in behaviors, such as argumentation, silence, and withdrawal that “function to reinstate white racial equilibrium.” The “racial comforts” afforded to white people also work to lower their tolerance to racial stress, according to DiAngelo.

In the context of Charleston, white fragility extends beyond the pleas on Twitter for black people to remain peaceful, to not blame all white people, and is reflected in how Roof was represented by the media.

The shooting happened on Wednesday, and by Thursday, the media began building a narrative that Roof was mentally ill without any substantial proof. Had he been a Muslim or a person of color, pundits would have thrown “terrorism” around as though we were on the verge of a second 9/11.

When Chapel Hill students Deah Barakat, Yusor Abu-Salha, and her sister Razan were murdered by Craig Hicks in February, the police quickly released a statement that the killings were “motivated by an ongoing neighbor dispute over parking.” Despite the police’s quick assessment of the murders, the victims’ family believed the murder to be a hate crime; the three students were Arab Muslims, and the two women wore hijabs, a marker of the Islamic faith. He was quickly written off as a vocal “anti-theist,” he was said to have had “equal opportunity anger” by a neighbor he frightened.

As a result, he has yet to be charged with a hate crime, instead, he was charged with three counts of first-degree murder that resulted from being a crazy hothead whose crime “”highlights the importance of access to mental health care services.”

Diagnosing the shooter with mental illness or characterizing him as a lone wolf  decentralizes the discourse and shifts it away from racism.

U.S. media outlets practice a different policy when covering crimes involving African-Americans or Muslims. As suspects, they are quickly characterized as terrorists and thugs (if not always explicitly using the terms), motivated purely by evil intent instead of external injustices. While white suspects are lone wolves…

Individualization is, of course, a privilege of white murderers and terrorists. To echo Butler, black and non-white Muslims are rarely characterized as individuals, but as an indication of greater issues within black and Islamic communities.

Victims of white violence are even subjected to the racist microscope, with every facet of their lives demonized and used as justification for their deaths. Mike Brown was “no angel.” Tamir Rice was a “12-year-old in an adult’s body.”

In contrast, we were told about how Roof was a good kid, how what he had done was a freak occurrence. “[W]e’ll never understand what motivates anyone to enter one of our places of worship and take the life of another,” Haley wrote on her Facebook page in the wake of the shooting. Sure. When a white gunman enters a black church that has a significant history of resistance to slavery and oppression, racism is still an unfathomable motivation.

Diagnosing the shooter with mental illness or characterizing him as a lone wolf  decentralizes the discourse and shifts it away from racism, erasing notions of white supremacy from the conversation.

But we know this was a terrorist hate crime—as Roof’s manifesto specifically illustrates—and we know that the Confederate Flag is a symbol of the values and ideologies prevalent in the motivations for the massacre at the Emanuel AME Church.

Haley was forced to confront the gruesome history of the flag in the wake of the shooting, while still managing to sweep the state’s white supremacist heritage under the rug. Like #NotAllWhitePeople suggests, the collective denial of racism’s existence doesn’t create a space for progress. Sure, #NotAllWhitePeople are racist and #NotAllSoutherners are nostalgic for antebellum days, but their insistence of that does nothing to prove otherwise. And by denying the opportunity for interrogation they are definitely a big part of the problem.