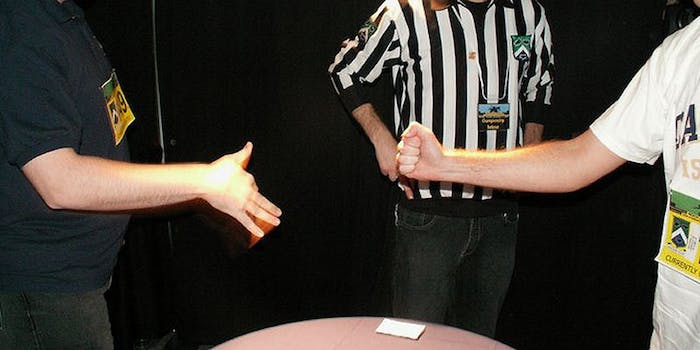 It's all in your head.

Despite the obvious permanent damage it’s doing to my mental health, I’ve been delving as deeply as I can into niche competitive scenes via Google searches and YouTube queries. I started with chess, because it turns out there are tons of highly specific chess videos—many of them quite bonkers.

This time, we’re going to tour the crazy, hilarious, and actually kind of awesome world of high-level Rock, Paper, Scissors.

I don’t have the answers to all those questions, but I can tell you with absolute certainty that there is a dedicated RPS community. If there weren’t, then this YouTube video wouldn’t exist.

Yep, that’s right. That’s totally a terrifying robot glove designed to play rock paper scissors against you. This is incredible for a number of reasons.

In addition to robot hands, the RPS community has some truly fascinating other bits. If you venture over the World RPS Society, you’ll find some of the most brow-furrowed game theory ever devoted to something so inconsequential. And you know what, they kind of have a point!

Plenty of feints, trash talk, and emotional abuse could go into a round of RPS. If you could subconsciously coerce your opponent to tossing a scissors when you’re going to throw a rock, you could be world champion! It’s something that’s summed up on the Society’s website.

RPS is gaming at its most basic, its most fundamental. Take anything away, and it ceases to be a game at all. Every other game, at some level, contains RPS. Like chess or fencing, the rules are simple, but the game itself is as complex as the mind of your opponent.

Playing RPS probably won’t make you rich and famous. Chances are good you won’t win an Olympic gold medal. And it’s not likely to improve your physique, maximize your sex appeal, jump-start your career or expand your memory. Many players have found, however, that studying RPS gives them a greater understanding of how gaming relates to human behavior. In that sense, RPS can help you find success in other areas, but only if you have the determination to work hard and think hard – not just in RPS, but in every area of your life.

There you go! Zen and the art of RPS. The best part of the site is where they boil down Rock, Paper, and Scissors into archetypes—the characters of the game, complete with some outstanding MS paint mockups. 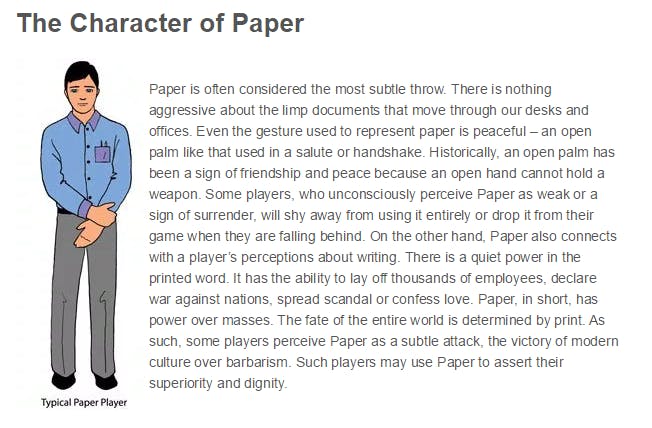 It goes so deep, man. High level RPS players sometimes use “gambits.” A “gambit” is when you lay out exactly what you’re going to throw in a RPS tournament. In advance. All three of your throws, completely planned ahead of time. That way you can avoid being manipulated by your opponent into throwing a paper into his scissors! I’ve broken your code! I’m like Batman! All of these “gambits” have predictably awesome names, too, from “The Avalanche” to “Fistful o’ Dollars” to “The Denouement.”

There are also meta-strategies—basically what you and I did in elementary school, around the last time we cared about winning RPS. For instance, if you tell the person you’re playing, “Come on, bring me the rock,” you know for sure that they won’t throw rock! That makes rock a safe throw! You can put down the paper without worrying! That is, unless they see what you’re trying to do so they bring rock anyway, but at that point you should know that they know what you know… and that you should bring paper… of course, if they know that you know that they know what you’re trying to do… then… then… OK, maybe high-level competitive RPS rules.

So there’s a look the beautiful world of serious Rock, Paper, Scissors. I’ll leave you with one last quote from the World RPS Society’s website.

Finally, it bears mentioning that there are also “Mystical Schools” of RPS. These instruct students to select their throw based on some inner force, higher power, or telepathic premonition. Such approaches vary so widely among themselves and results are so mixed (or mixed-up!) that there is no point in trying to catalogue or categorize them. Nevertheless, the well-trained RPS player will be aware that these schools exist and know their basic tenets.

Let it never again be said that RPS is just a game.

Photo via Michael Whitney/Flickr (CC BY 2.0)