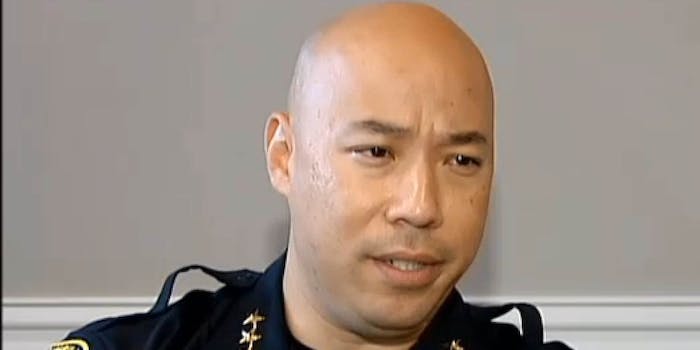 Police chief to Facebook critic: If you want to legalize pot, you’re probably a criminal

Ruben Santiago, interim police chief of Columbia, S.C., thinks advocating for the legalization of marijuana makes you a likely criminal.

If you criticize the police, one South Carolina chief thinks that gives cops “reasonable suspicion that you might be a criminal.”

Police in Columbia, the state capital, recently seized “$40K of marijuana.” When the cops happily announced their success on Facebook, Columbia resident Brandon Whitmer let them know what he thought of the bust.

“Maybe u should arrest the people shooting people in 5 points instead of worrying about a stoner that’s not bothering anyone,” Whitmer wrote. “It’ll be legal here one day anyway.”

“@Brandon whitmer, we have arrested all the violent offenders in Five points. Thank you for sharing your views and giving us reasonable suspicion to believe you might be a criminal, we will work on finding you.”

Santiago’s threat to find Whitmer has sparked outrage online and off. The message was soon deleted but, not one to take criticism lightly, Santiago soon returned to Facebook. 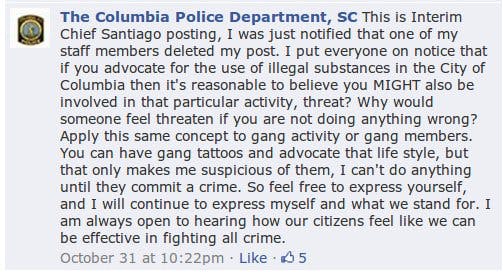 To this police chief, advocating for the legalization of marijuana is apparently pretty much the same as sporting gang tattoos. That position that has found hundreds of vocal critics registering their displeasure on Facebook.

When the law blog Popehat reached out to the department, a spokesman confirmed that “Chief Santiago did write those two posts” but that they were “misconstrued.”

“Chief was trying to say that he puts would-be-criminals on notice,” the Public Information Officer said. “If you commit a crime or plan to commit one, CPD will work hard to investigate and press charges according to the law.”