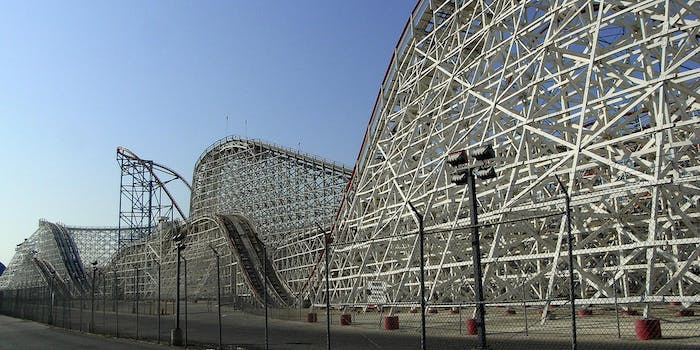 Fortunately, no one was hurt.

The Colossus, a wooden roller coaster at Six Flags Magic Mountain in Valencia, Cali., closed on Aug. 17 for renovations. On Sept. 8, flames erupted atop the coaster’s main hill. The fire was so severe that the track melted and, as a result, part of the ride collapsed.

Many Twitter users living or driving near the park were able to capture stunning images as the fire raged.

just drove by magic mountain and colossus is on fire pic.twitter.com/5kJ0gevmc9

Why is Colossus on fire? pic.twitter.com/ZKM29zGYv1

According to NBC Los Angeles, the fire was placed under control just before 2pm local time, less than a half-hour after it was reported. Since the park was closed at the time, there were no injuries.

Top of lift hill at Colossus caught fire today. There are no injuries and the fire is contained. LA Co Fire is on scene. Park is closed.

There is still no word on what exactly caused the coaster to catch fire in the first place.

After operating the iconic coaster for 36 years, Six Flags began the process of renovating Colossus to convert it into a looping ride with a steel frame, originally slated to open in 2015 as “Twisted Colossus.”

Movie buffs will recognize Colossus from National Lampoon’s Vacation, in which Chevy Chase and his family ride it in the movie’s final scenes.