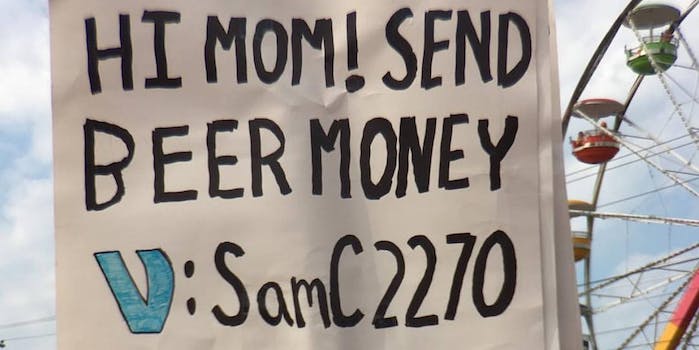 The sweet smell of tailgate barbecue is in the air. Dudes are walking around looking like the face painter from Seinfeld. And there are many, many drunk football fans. It’s Saturday in September, and that can only mean one thing: college football. More specifically, ESPN’s College GameDay.

College GameDay was in Bristol, Tennessee on Saturday morning for the University of Tennessee-Virginia Tech matchup. As any college football fan knows, the best part of College GameDay is the signs, typically humorous and sometimes an incredibly useful way to send a message.

Some dude named Sam Crowder really needed some financial help getting his drink on. His solution? A College GameDay sign. He bought some poster board, grabbed a few markers, and wrote, “Hi Mom! Send beer money,” followed by his Venmo username @samc2270. Somehow the sign made it on TV right behind Kirk Herbstreit’s head.

Soon, Crowder’s Venmo was blowing up with transactions, but not from his mom. Hundreds of strangers flooded Crowder’s account with beer money donations. According to TotalProSports.com, more than 400 people have dropped money into Crowder’s virtual piggybank.

Unfortunately, Venmo doesn’t publicly show the dollar amounts of donations, so there’s no way to know exactly how much money Crowder’s made on the gag. But we’re guessing beers at Bristol Motor Speedway aren’t cheap.

Lee Corso picked Tennessee to win the game and racing legend Richard Petty even dropped in. The real winner, though, is Crowder. If support continues, he’ll be getting drunk on strangers’ dimes for weeks to come.