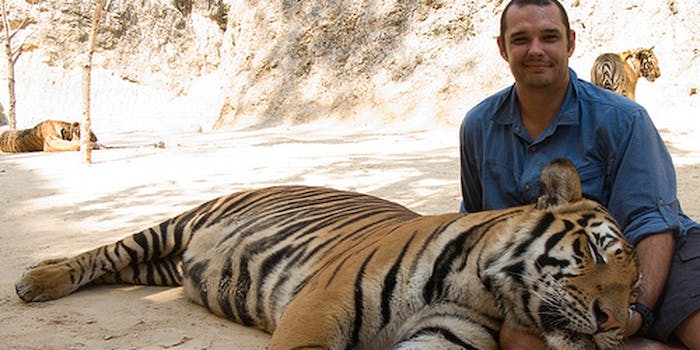 Colbert has a hilarious solution for the tiger selfie ban

PETA can't be happy about this.

New York’s male hook-up artists were dismayed to learn this week that Tinder and OkCupid profile photos featuring caged tigers were not only an obvious, dumb, and popular ploy to score meaningless sex, but they would also soon be illegal. Naturally, Stephen Colbert took their side.

“This is how endangered species save themselves, by helping us get laid,” Colbert argued on his show last night, making a powerful point about the Darwinian foundations of symbiosis. And despite the new ban, he said, men remain free to snap selfies with “the noble snow leopard, the breathtaking blue whale,” and “the majestic Santa Cruz long-toed salamander.” (Manhattan Assemblywoman Linda Rosenthal, who introduced the legislation, remarked that people “can still pose with bears and monkeys,” as if there’s anything exotically sexy about them.)

The idea that tiger photos themselves now constitute a criminal act was perhaps overblown, however, as Mashable pointed out: Rosenthal’s bill “targets something entirely different—the dangers posed to public safety by traveling menageries and roadside zoo attractions.” Of paramount concern is the mistreatment of wild cats (including cramped quarters, declawing, and yes, photo ops), which has led to escapes and maulings.

So go ahead and buy your tickets for Thailand’s Tiger Temple—just don’t expect anyone who cares about animals to swipe right.