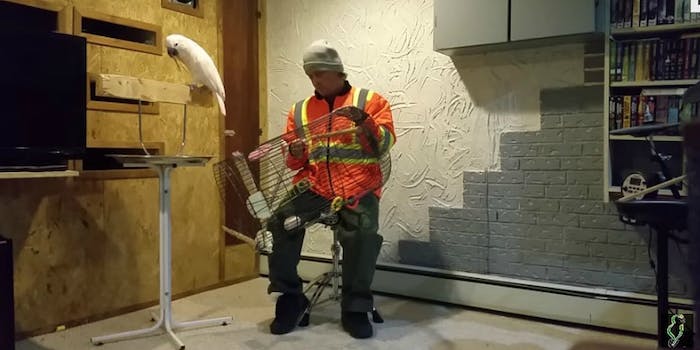 The language is definitely NSFW.

Pet birds apparently hate round cages, but you know who hates them just as much? The guy in the video below.

Before you watch him try to fix the round cage for a rescued parrot named JoJo, here’s a quick tutorial on why round cages apparently are bad news (I’ve never had pet birds, so I had no idea about any of this.)

According to Birds N Ways, “Many people have expressed concerns that round cages are psychologically bad for parrots. It is believed that birds are uncomfortable without a side and/or corner to perch next to and spend a lot of time going in circles around the cage searching for a ‘secure’ resting place.”

Now, watch how the man tweaks the round cage to make it more suitable for his parrot’s needs, and watch how Pebbles, another parrot who knows a thing or two about a thing or two, responds.

Say this for Pebbles. The bird’s vocabulary might be limited, but it certainly understands and how and when to throw out an F-bomb.