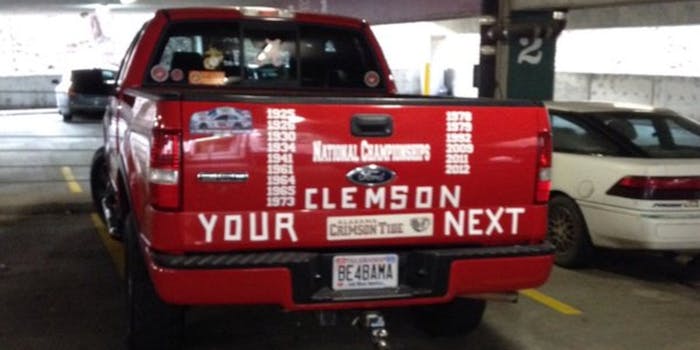 Woman trolls dude trying to mansplain grammar to her

Who made you the grammar police?

Sometimes there’s nothing more annoying that someone correcting your grammar or spelling. We’re human, everyone makes mistakes. But what’s even more aggravating is when a person comes after you and they’re actually wrong. Sports writer Claire McNear used this situation to totally troll the nuisance.

On Wednesday McNear published a story with the headline “This Alabama fan put ‘YOUR NEXT CLEMSON’ on their truck.” You might see the “your” and think it’s supposed to be “you’re,” but in reality the error was on someone else. McNear’s story simply pointed out that someone had originally made the mistake while showing their team pride on their car, only to later fix it.

In my parking deck today, no kidding pic.twitter.com/vSEL6XdEO7

But that didn’t stop one man from assuming McNear had made the mistake. The self-appointed grammar police comes after her because she “never mentioned the grammatical error” and asks if she missed the mixup as well. 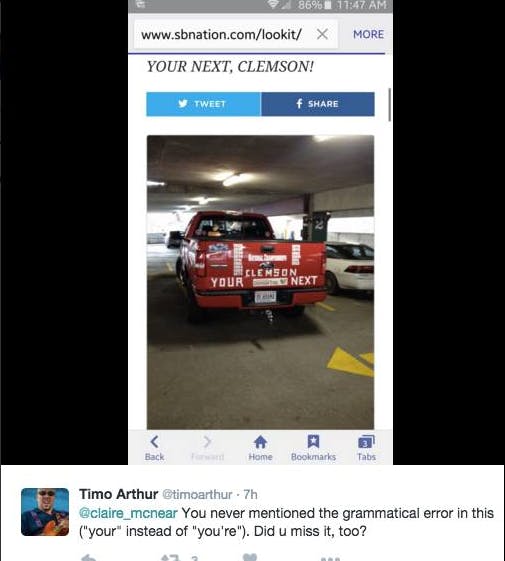 He ended up apologizing for the situation, acknowledging that he didn’t read the entire story.

@claire_mcnear I know my mistake now. I never saw the second picture of the truck correcting the mistake. My bad and I apologize. I'm an ass

But that wasn’t before McNear seized the opportunity and trolled him like no other. Over direct messages, she plays around like she believes that “your” and “you’re” are synonyms. It eventually escalates into a hilarious climax, which you can check out for yourself:

so a guy reached out to double-check that I knew the difference between "your" and "you're" today pic.twitter.com/FirfUeUCW3

Dang this guy made a total fool out of himself. Maybe even more than the guy with the truck.