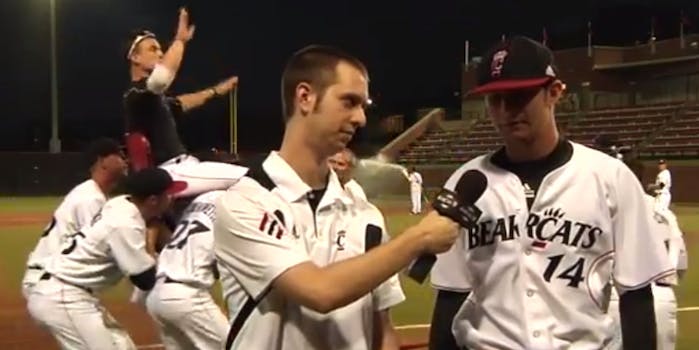 The University of Cincinnati photobombing team has a baseball problem

The Cincinnati Bearcats baseball team played quite poorly this year. So poorly, in fact, that their coach, south Ohio legend Brian Cleary, who managed the team for 17 seasons, got handed his walking papers mere days after the team finished eight games under .500, and 6-18 in the Big East Conference.

The Bearcats couldn’t hit, they couldn’t field, they could hardly pitch, and they rarely ran the bases well.

What they did do well, however, was photobomb the hell out of some post-game interviews.

The Bearcats became the talk of the baseball town this season for the way they handled their post-game duties, becoming something more akin to a sketch comedy club than anything remotely close a business-as-usual baseball squad, recently earning distinction from the New York Times for their on-field antics.

“It started with me walking by the camera and smiling after a win,” designated hitter Ryan Quinn told the Times. I got some laughs from that. The following game we were playing Ohio State and we won, and I told our first baseman to put me on his shoulders and walk by the camera. That kind of blew up on Twitter that night.”

Things took off from there. The Bearcats had found a new way to celebrate their victories. Before long, they were playing dead, bringing out props, and putting on some complex productions.

The shenanigans helped to create a loose atmosphere around the locker room, but did nothing to make their post-game interviews easier.

“It’s horrible,” pitcher Connor Walsh told the Times. “When I was getting interviewed after a game, I saw Quinn in my peripheral vision on a chair getting carried by the guys. It’s tough just to keep a straight face.”

Quinn said that the skits usually come to him just before each interview, after the game when he’s taken his mind off the field.

“He’ll kind of decide the plot and pick the cast,” infielder J.P. Jackson said. “We don’t rehearse. We run around, grab some props. Come up with the idea and just go for it.”

And that’s how you get this on a baseball field.

Last week, the University of Cincinnati’s athletic department released a prank compilation on YouTube. Since going up, the video’s already been seen nearly 1 million times.