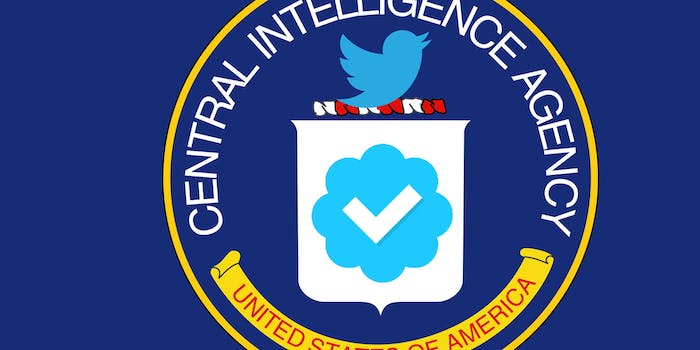 What could be more reassuring than the CIA having a public Twitter feed? They’re just like the rest of us! Just a bunch of fun normals who make dumb workplace jokes on a Friday afternoon! Definitely not a shadowy government agency with the power to kill you in your sleep!

@CIA posted its first tweet with the smooth confidence of a dad who laughs at his own jokes, and it’s already been retweeted over 70,000 times.

We can neither confirm nor deny that this is our first tweet.

It looks like this is part of a wider plan to make the CIA seem hip and cool and down with the Internet kids. On their website, a new update titled CIA Goes Social instructs readers to “Follow us on Twitter @CIA and on Facebook for the latest CIA updates, #tbt (Throwback Thursday) photos, reflections on intelligence history, and fun facts from the CIA World Factbook.”

Yes. We will definitely do that. Throwback Thursday to all those human rights abuses during the War on Terror, anyone? Yay, social media!

You will probably not be surprised to hear that Twitter users have been less than receptive to the CIA’s cheery introduction to the site.

We regret to inform you that #CIA now has a Twitter. Looking forward to pics of its cats. Supporting dictators. Torturing people. Napping.

Seems like the @CIA has really misread Twitter and gotten itself into a quagmire. This is the first time in its history that’s happened.

I guess the CIA being on twitter is funny, but mostly I think about how they’re using robots to murder people who never get a trial.

What do you guys think is the CIA’s funniest Twitter meme? I’m going with the 1973 Chilean coup.

So, @cia tweets. Can’t wait for #ciaclickbait: “In 1961 we tried to get rid of Castro for 1st time but what happened next will surprise you”

Presumably there are some people for whom a single cutesy tweet is enough to make the CIA seem fun and approachable. However, we like to imagine that they’re in the minority.

Not to sound like a full-blown conspiracy theorist here, but this inappropriately quirky Twitter feed seems like a great way to lull people into a false sense of security. Their introductory tweet doesn’t “prove that the CIA has a sense of humor,” it just indicates that they’re good at distracting people’s attention away from this week’s drone-related murder allegations.