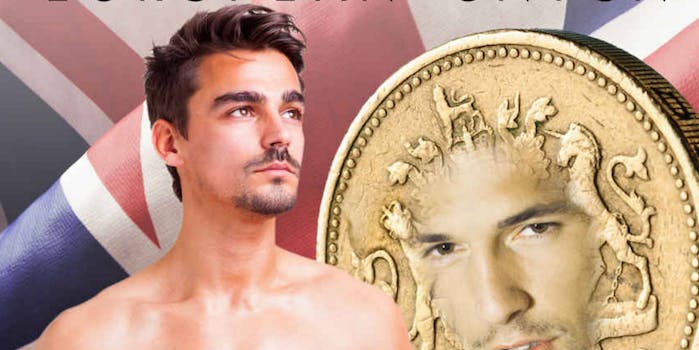 All you need is love. And butt-pounding.

Britain’s contentious decision to exit the European Union has simply dominated the news cycle since a formal announcement was made on Friday. Citizens are filled with regret, wishing they could take the vote back and forget the Brexit ever happened.

This whole mess could’ve been avoided if the U.K. believed in love, thereby making it real. And by it, I mean a utopian Buckaroo society of British butt-pounders—perhaps the best analogy for a united EU.

In between searching for nudes of the entire continent of Europe, Chuck Tingle was able to crank out a tingler that should give the world a whole lot of hope. In fact, the future can be a beautiful thing if you buy into erotica king Tingle‘s latest captivating tale.

POUNDED BY THE POUND: TURNED GAY BY THE SOCIOECONOMIC IMPLICATIONS OF BRITAIN LEAVING THE EU https://t.co/D2drLr7oZ4 pic.twitter.com/q4E54UMnGg

The man who brought you Feeling the Bern in My Butt has finally weighed in on the most consequential decision the British people have faced since naming the latest Dr. Who successor. Pounded by the Pound follows the adventures of Alex Liverbort and his lover, a sentient British pound from the future.

The time-traveling coin came throttling back to present-day London to give Liverbort a throttling—while also trying to save the United Kingdom. In Pounded by the Pound, the future is pretty fuckin’ bleak:

Without another thought, I jump up from the bench and run forward, diving through the trans universal slice and ending up carried to a hellish landscape of fire and smoke on the other side… Strange creatures circle the sky in red uniforms with large black hats, dressed in the Queen’s Guard but with leathery reptilian wings and extended knifelike teeth.