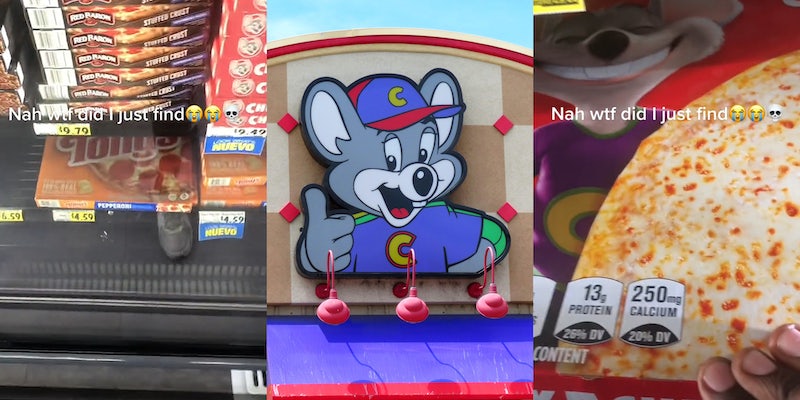 'You found a gold mine.'

Chuck E. Cheese pizza is being sold in grocery stores, according to TikTok that’s been viewed 1.8 million times.

Viewers are clamoring to learn more after the video showed a pile of Chuck E. Cheese pizza boxes in one store’s frozen foods section. The video showing the frozen pies was posted on Oct. 5 by I’m_that_guy, who posts under the handle @hoops_gg_prods.

The video starts blurry, but it’s clear the TikToker is in the frozen foods section of a supermarket. The text overlay reads, “Nah wtf did I just find.” The camera then adjusts as the person filming points to the camera to a pile of Chuck E. Cheese pizzas in the grocery’s freezer and pulls out a box with the famous rodent’s smiling face. The short clip ends there.

Users in the comments section had plenty to say, with a number of people expressing their own desire to purchase a Chuck E. Cheese pizza from their local grocery store.

“I WANT ONE,” one user said in a short and to the point comment. “Nah you found a gold mine,” said another. “Bro I have one of those in my freezer rn,” admitted a third.

A lot of people also brought up the Chuck E. Cheese conspiracy theory, which gained popularity in 2019. It posits that the famous children’s entertainment and eating establishment assembles uneaten slices into new pizzas and passes them off as having just been baked. The theory gained so much traction that the restaurant chain put out an official statement saying the conspiracy claims were completely false, per the Washington Post.

“More recycled pizza,” one user said. “They trying to get some money from the old pizza in the stores they closed down,” another joked. “They prolly recycle that too,” a third user claimed, suggesting that Chuck E. Cheese also collects the leftover frozen pizzas to assemble into the frozen pies sold at grocery stores.

But despite these rumors, a number of users wanted to know exactly where the TikToker had filmed his video so they could drive over and grab their own boxes. “Omg where is this at!!????” Asked one person. “What kinda store is that in, I actually wanna try it,” inquired another.

While the TikToker did not give away the location of the frozen pizzas, other helpful users in the comments listed grocery store locations where they had encountered Chuck E. Cheese pizza. “At dollar general,” one person said, while couple of users mentioned finding it at Krogers. One also claimed they “always see that in food4less.”

The Daily Dot reached out to @hoops_gg_prods via TikTok comment.