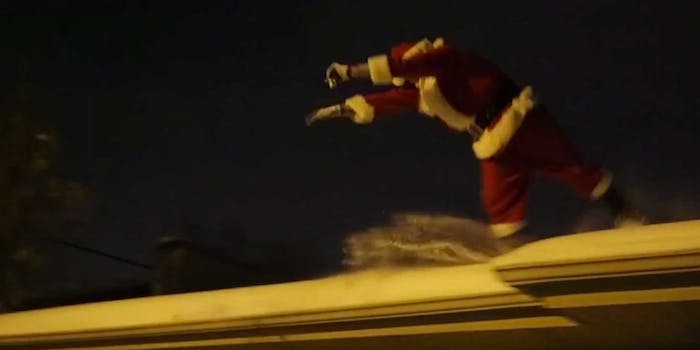 How Santa really gets from house to house on Christmas Eve

It’s a question as old as the myth of Santa Claus himself, asked by countless skeptical children each December: how can one portly man, in the space of a single wintry night, visit all the households on his list? Especially when you factor in headwinds? The answer provided in this holiday YouTube clip is surprisingly simple, though certainly magical: parkour.

The ever-agile Ronnie Shalvis takes on the role of an especially nimble Saint Nick, placing some presents under a tree with quiet care before a dubstep rendition of “Jingle Bells” drops and he flings himself out into the night, doing a sweet roll in the front yard. From there it’s a jolly romp around the neighborhood, from rooftop to rooftop (with some detours to parking garages, etc.).

For the parkour community, they may be fairly standard stunts, but running on all that ice, and sliding down snowy inclines toward precipitous falls—all while wearing a felt suit and fake beard—seems awfully impressive in its own right. We’ll forgive the odd ending, something of an homage to The Santa Clause; the important thing is that we can finally believe again.