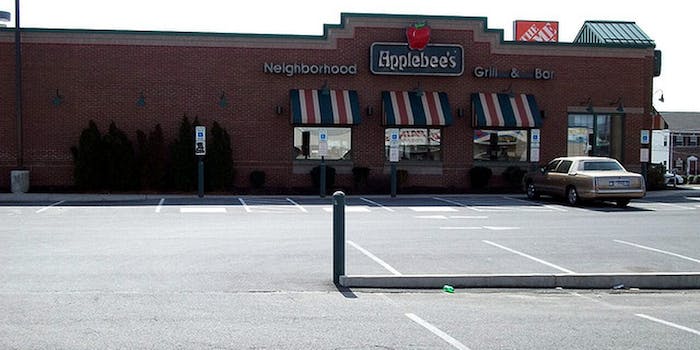 Chip Zdarsky tried to knock down the fourth wall between Facebook user and the Applebee's brand.

A lot of people interact with brands on Twitter and Facebook as a social experiment or to volley a complaint. But last summer, Chip Zdarsky, a Canadian comic book artist, embarked on a months-long virtual relationship with an Applebee’s Facebook page, and the results were pretty endearing.

Zdarsky created the life-affirming tag “applebeesandme” on his Tumblr to document his exchanges with the Barrie, Ontario, Applebee’s. He and and the restaurant chain spent Halloween and Christmas together (at least on Facebook threads), discussed eating habits, family, and they even critiqued his jokes. 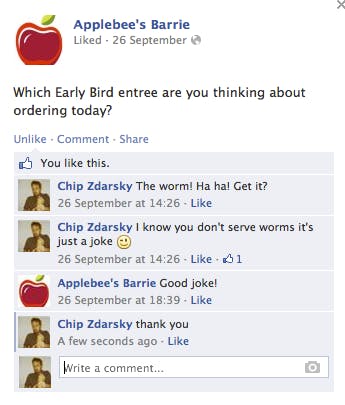 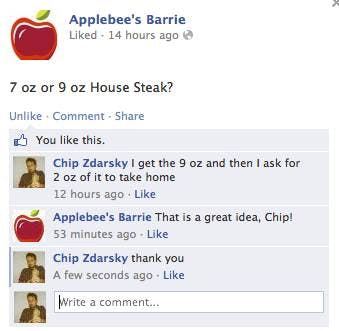 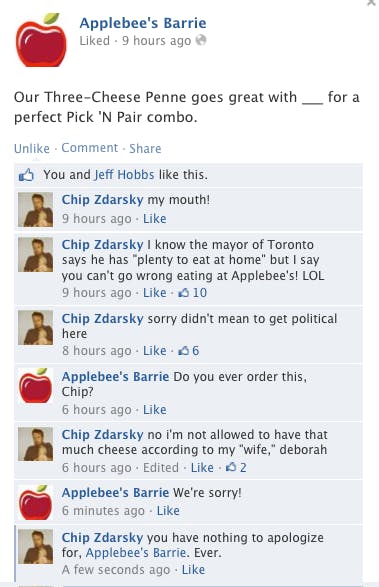 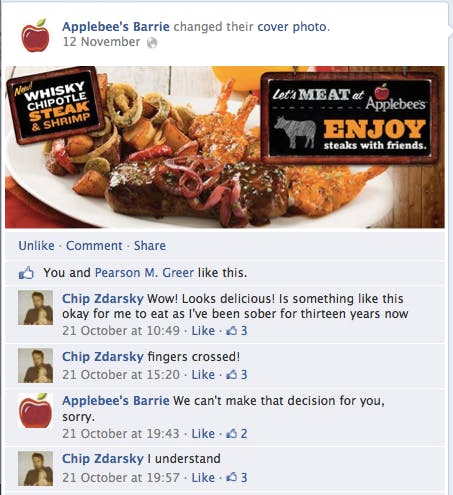 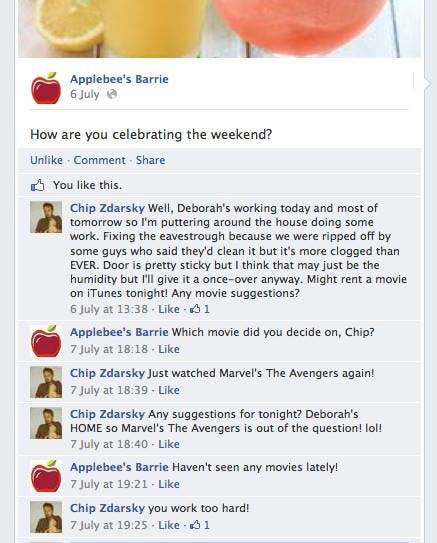 It’s gotten to the point where people are looking for Zdarsky in the threads now, seeking out his opinion. But all good things must come to an end.

In addition to his Applebee’s odyssey, Zdarsky recently released the fourth installment of the comic Sex Criminals, co-created with fellow artist/writer Matt Fraction. We asked him a few questions about his special relationship, and how it inadvertently got him press for Sex Criminals.

Can you tell me the origin story of your Facebook friendship with Applebee’s? Your first interaction?

One day while on Facebook I noticed not one, but both of my parents “like” a photo of a burger. It was a burger posted by Applebee’s Barrie. I thought it would be funny to join in and solidify our family’s validation of this local franchise’s hamburger. But then I started going through their Facebook page, which was just post after post with almost no one writing back, just an upbeat person doing their job in a void. I had to make them mine.

Have you ever met the person behind the account?

I’ve yet to meet the person behind the account. But they just offered me a free meal and the mayor of the city wants to join me, so I’m hoping it happens soon.

Did you find yourself looking forward to talking to Applebee’s, much like when you have a crush on a person in real life?

I would forget about them for weeks and then something would pop up in my timeline and I’d see the opportunity and get excited. So, less like a crush and more like a nice, platonic booty call situation. The hardest part was waiting for their responses! They had clearly adopted some social media rules, like staying upbeat, posing questions, moving conversations back to their brand; but I always just wanted to get them to stray from that, to be themselves. That’s where the humour was for me. Whenever that would happen I’d get a little giddy. Most jokey interactions with brands online are usually pretty negative, and I get that and have been guilty of it myself. But I liked keeping this polite and happy, y’know? It felt funnier and different.

Would you get upset when you saw people making fun of them?

There was a bit of that, and I felt bad because I brought those people there inadvertently. When people would try to play along and, for some reason, be mean to Applebee’s Barrie, I would actually email them to tell them to stop ruining it. It was partly self-preservation, because I didn’t want the person running the account to connect the dots and see that I was collecting and displaying these interactions. But it was also, like, they’re just trying to do a job, y’know? And they seemed nice. They don’t need the abuse.

Have you ever been to Club Applebee’s?

Ha! No. I’ve legitimately only ever been to the Applebee’s in Barrie because it’s my parents’ favourite place to eat.

Have you continued to interact with them? Will you have to “break up” with them, or whatever that particular act is called on the Internet these days?

Well, when my posts on Tumblr started getting more popular, too many people tried to join in. I started wrapping things up when the BuzzFeed article hit and now the site is so overrun with people that it’s just naturally over. I’ve resisted going in and responding to people. It’s better to end it, really.

What do you think about brands on Facebook and Twitter attempting to engage, often with horrible results? Have you interacted with other brands via social media?

I’ve interacted with brands before for jokes ‘n’ giggles for my friends, but you just kind of get lost in the sea of people. This was so one-on-one, which is rare and made it a totally different thing.

I feel like people get a bit of a charge when a brand responds to them, as if a Doritos account is a bit of a celebrity. But then when they stop and realize it’s just a—probably underpaid—desk jockey who gets insulted all day, the sheen is definitely off at that point.

What have you learned from this friendship with a brand?

Nothing. I mean, besides the fact that sometimes a nice, polite joke told over nine months can get me some sweet interviews.