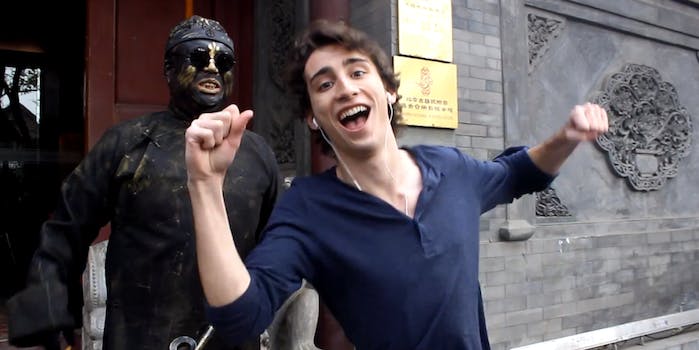 Watch this college student dance his way across China

We don't know how his Mandarin skills are, but at least the language of dance is universal.

When Jake Gaba went to study abroad in China, he knew that he wanted to capture his trip—but that photos alone wouldn’t be enough.

So he decided to throw himself a country-wide dance party.

Over the course of his 100 days in China, he took at least a few seconds out of his day to record himself dancing to Bruno Mars’s “Treasure” set to his own choreography.

His adventures took him through Beijing, Chengdu, Xi’An, Lhasa, Yangshuo, Zhangjiajie, Shanghai, Feng Huang, and Hong Kong, and many of the locals even joined in on the fun.

Even if there was a language barrier in trying to explain to them what he was doing, at least the language of dance is universal.