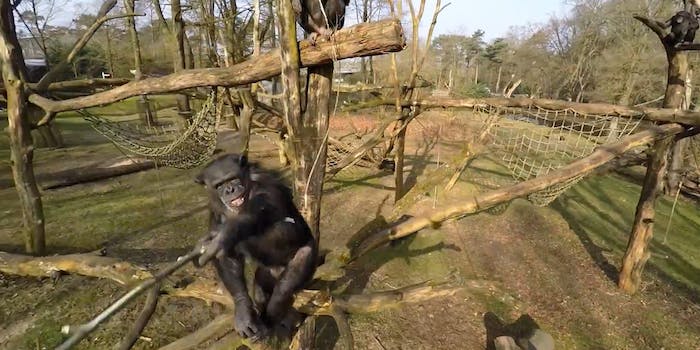 Chimp knocks drone out of the sky—and it keeps filming

This chimp has had enough of humanity's technological accomplishments.

The human race certainly seems to be mesmerized by drones lately, but it appears that our closest primate ancestors aren’t quite so enchanted by them. Captured at the Royal Burgers’ Zoo in the Netherlands, this drone-shot video showcases just how fed up one particular chimpanzee is with mankind’s latest tech toys.

This chimp has absolutely had enough of our gadgets and it’s ready to destroy them, given the chance. If you look closely you can even spot a sinister grin on its face as it bats the poor drone out of the sky and gives it a good once-over once it’s been incapacitated.

Thankfully, while the drone itself was destroyed, the footage the camera recorded was still salvageable and will live on as a warning that technology and nature don’t mix.