You know what they say: brands gonna brand.

Everyone loves emoji. This is an indisputable fact. They’re better for expressing emotions than complicated and cumbersome words. Given how popular they are, especially among millennials, it was only a matter of time before a car company harnessed emoji to sell its gas-guzzling death machines to consumers who just can’t look up from their phones long enough to walk into a car dealership. 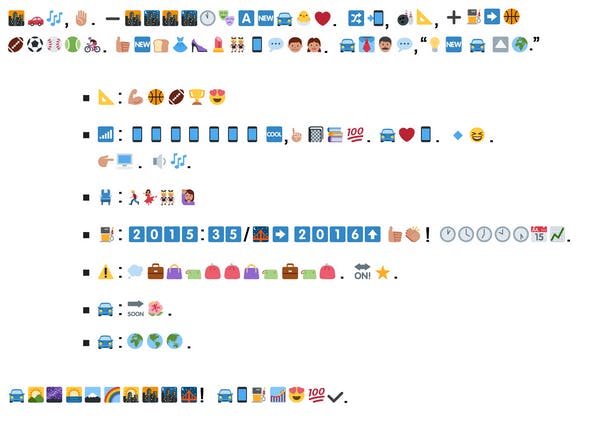 “It’s pretty clear that Chevy is trying to tap into the zeitgeist while simultaneously targeting the youth demo,” Alfred Maskeroni, Director of Video at Adweek, told the Daily Dot via DM. “On the heels of Father’s Day, it’s almost like they’re trying to send the message that it’s not your dad’s Chevrolet anymore.”

The car company didn’t offer an English-language translation, instead daring readers to “decode this news or watch for the decoder” at 2pm ET on Tuesday.

But I can’t wait that long. This is what I, a real-life millennial, think this press release is trying to say.

In the city, there was a car that played music, stop. Then some other cities with time for plays got a new car and a chicken and they loved it. The iPhone was remixed, the bowling pins were accurate, and then getting gasoline turned into a game. The Gasoline Games were the best thing since sliced bread, or those new clothes you got, or those dancing girls, or the unremixed phone, or your children. You suited up for the gas games, and thought, “I’ve got a new idea, let’s go above earth to fight the Gas Games.”

— It was perfect: all of the sports and victory.

— The seats: People just danced forever, no one was allowed to sit down. A girl threw her hands in the air wildly.

— The gasoline: The war only lasted one year—don’t forget about the battle on the bridge—but it felt like it lasted for 35. Time felt like forever.

— Warning: Don’t trust any bags. Any. Bags. They might be filled with stars.

— Cars: they turned into flowers after the games were over.

In the end, the cars ran the cities forever! We are 100% in love with the Gasoline Games forever.

With no official translation to prove me wrong, that’s what I assume Chevy is saying.