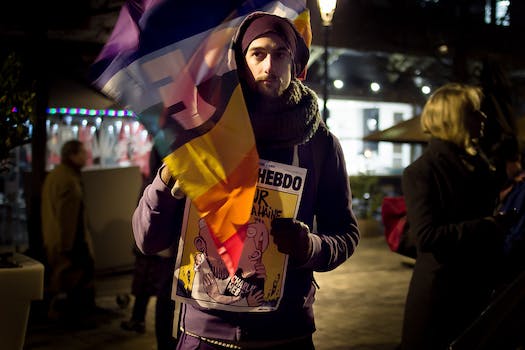 Salman Rushdie slammed the PEN Awards' critics in a tweet, but the opposition to Charlie Hebdo needs to be heard.

Last night, the PEN American Center honored French magazine Charlie Hebdo with their Freedom of Expression Courage Award. This was done, of course, in recognition of the January attacks on Charlie Hebdo’s Paris office, attacks in which Islamic extremists killed eight employees of Charlie Hebdo, a visiting travel writer who happened to be sitting in on their meeting, a building maintenance worker, and two police officers.

PEN President Andrew Solomon spoke at the gala, saying: “The defense of people murdered for their exercise of free speech is at the heart of what PEN stands for. Charlie Hebdo‘s current staff have persisted, and tonight’s award reflects their refusal to accept the curtailment of lawful speech through violence.”

These remarks come in the wake of protests against PEN bestowing such a prestigious award on a publication whose stock in trade is objectively racist, sexist, and Islamophobic cartoons. Over 200 PEN members, including literary giants such as Junot Diaz, Michael Ondaatje, and Peter Carey, have signed a letter condemning this award. Several of the people scheduled to present awards at the gala chose instead to boycott the event, an act that led writer Salman Rushdie to take to Twitter and call them “pussies.”

[email protected] @NickCohen4 The award will be given. PEN is holding firm. Just 6 pussies. Six Authors in Search of a bit of Character.

Apparently Rushdie is of the opinion that the only acceptable form of bravery is creating work designed to provoke and hurt. It’s unfortunate that he doesn’t see the courage required in order to stand up against your peers for what you believe to be an unconscionable decision.

Before going any further, a brief note explaining the derision expressed here towards Charlie Hebdo‘s work. First of all, it is understood and acknowledged that Charlie Hebdo is a satirical magazine with a progressive, liberal agenda. It is also understood that much of the racially charged imagery used by Charlie Hebdo was deployed with the intent of skewering racist right-wing politicians. Finally, it is understood that the intended targets of their Prophet Muhammad cartoons were not mainstream Muslims but rather radical Islamicists.

However, none of these things take away from the fact that the cartoons are deeply racist.

Charlie Hebdo relies on bigoted tropes to communicate its high-minded ideals. Their Muslims are always portrayed as Arab men with big noses, while Africans are shown with big lips and rolling eyes. These stereotypes are not only widely considered to be racist but are also unnecessary. Charlie Hebdo doesn’t need to draw a person with grotesquely inflated lips in order for their readers to understand that the subject of the picture is black.

None of these things take away from the fact that the cartoons are deeply racist.

And yet they do.

Charlie Hebdo and its supporters have long claimed that they can’t possibly be Islamophobic because they also regularly target Judaism and Catholicism. Their argument is that because they mock all religions with the same level of malice—one of their covers depicted the Holy Trinity engaged in a threesome—they cannot be accused of bigotry against one specific religion. They like to view themselves as equal opportunity offenders who are intent on mocking all forms of organized religion.

However, as Saladin Ahmed articulated so perfectly in the New York Times, “equal opportunity” only works in a society where everyone exists on equal footing:

In a field dominated by privileged voices, it’s not enough to say, “Mock everyone!” In an unequal world, satire that mocks everyone equally ends up serving the powerful. And in the context of brutal inequality, it is worth at least asking what preexisting injuries we are adding our insults to. The belief that satire is a courageous art beholden to no one is intoxicating. But satire might be better served by an honest reckoning of whose voices we hear and don’t hear, of who we mock and who we don’t, and why.

Bigoted cartoons hurt people. In a society where anti-Islamic crimes are on the rise, inflammatory portrayals of Muslims exacerbate an already volatile situation. In a society where unarmed black people are being murdered by police, images that objectify and dehumanize them do nothing to ameliorate the situation. Racist images do nothing to debunk racism, no matter how “ironic” they might be; all they do is fuel negative stereotypes about marginalized groups.

There are real-world consequences to the types of images Charlie Hebdo is famous for, and the fact that they are being celebrated by a group that describes itself as “the world’s leading international literary and human rights organization” is frankly appalling.

It’s also appalling to see PEN framing the protests against their decision as a “debate” that “proves the relevance of groups devoted to freedom of expression.” Is it honestly so impossible to demonstrate the necessity of freedom of speech without valorizing bigotry?

Claiming that this is a perfect example of an “open society” where “well-intentioned people with shared values can interpret and weigh principles differently” is to deliberately and gleefully miss the point. This isn’t about whether opposing ideas and spirited discussions can create a healthier literary community. It’s about an internationally recognized organization rewarding a publication for images that incite violence against marginalized groups.

It’s one thing to tolerate what publications like Charlie Hebdo do. It’s one thing to recognize that freedom of speech means that offensiveness and bigotry should not be illegal. It’s quite another to celebrate offensive content as a brave stance against fascism.

Racist images do nothing to debunk racism, no matter how “ironic” they might be.

The attacks against Charlie Hebdo were abhorrent. No one should ever die because of what they believe in. However, their deaths do not take away from the fact that their work added to the marginalization and oppression of some of the world’s most vulnerable populations. The PEN American Center’s choice to reward Charlie Hebdo for their work makes them complicit in a culture that suffers from a convenient sort of amnesia when it comes to the history of the violence white Westerners have committed and continue to commit against people of color.

It’s shameful that an organization devoted to human rights seems to so easily turn a blind eye to racism and prejudice in their own ranks.