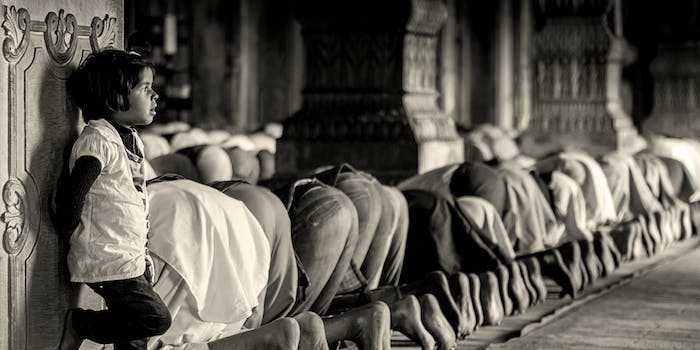 In just one week, a Houston mosque was set on fire, a Michigan family was attacked by a man shouting slurs against Muslims, and a Rhode Island school was vandalized with anti-Islamic messages. These three events took place after the murder of Yusor Mohammad, Deah Barakat, and Razan Mohammad Abu-Salha—three innocent Americans gunned down in Chapel Hill, N.C., this week.

Though their confessed killer, Craig Stephen Hicks, is locked up behind bars where he should be, the conditions that led to their deaths are still running rampant. Hicks didn’t act alone. He may have pulled the trigger, but it was the pervasive Islamophobia in American society that loaded the gun.

After 3 combat tours in Iraq, my only regret is that I didn't kill every muslim coward scum bag.

As NYC Mayor Bill de Blasio put it at a press conference amid 2014’s #BlackLivesMatter protests, the response of #MuslimLivesMatter is “a phrase that should never have to be said. It should be self-evident, but our history, sadly, requires us to say it.”

The same holds true when presidents have had to say “we are not at war with Islam.” The prevalence of the perception that the war on terror amounts to a war on Islam points to how the tension felt by Muslim communities ever since 9/11 got a shock to its system from the #ChapelHillShooting.

This was never about an individual case. It would be easy and convenient to dismiss this as a “parking dispute,” without confronting the bigger picture of systemic Islamophobia, and a culture of fear surrounding Muslim communities. That this event’s status as a hate crime was ever in question highlights the feeling many have expressed that a double standard exists in the media where violence against Muslims goes unrecognized, misrepresented, and downplayed in its shocking gravity.

Western media’s biased representation of Muslims has created a climate of hatred and hostility. Not only are Muslim representations in the media few and far between, those limited portrayals are filled with negative, damaging stereotypes applied wholesale to all members of the religion. “Anti-Muslim sentiment and crime are, at least in part, driven by one-sided, narrow, sensationalistic, and arguably bigoted western media portrayals of Islam and Muslims,” says Dr. Mohamad Elmasry, professor of Communications at the University of North Alabama.

Despite the fact that the global Muslim community is made up of 1.5 billion people with a myriad of opinions and a widely diverse culture, the mainstream representation of Muslims has been of a single homogenous identity—one worthy of suspicion and prone to violence—in a climate that has left many Muslims feeling unsafe.

“After every time a Muslim commits an act of violence, whenever I’m out in public I can feel everyone looking at me,” says Nerdeen Kiswani, a student at Hunter College in New York who says she has been attacked for wearing a hijab. “But even when it’s Muslims who have had violence committed against them, I still feel everyone looking and staring at me.”

Christopher Bail, assistant professor of sociology at the University of North Carolina in Chapel Hill, has analyzed the representation of Islam and Muslims in America following the attacks of Sept. 11, 2001. “I found that angry and fearful fringe organizations not only exerted powerful influence on media discourse about Muslims in the aftermath of the attacks, but ultimately became some of the most influential in the field,” said Bail.

Research showing terms like “terrorist,” “extremist,” or “Islamist” began to be overwhelmingly paired with Islam and shaped public perception to fit the language used. “The ‘Muslims as enemies’ frame depicts all Muslims as potentially violent radicals who have a religious obligation to overthrow Western governments,” said Bail, while also pointing out, however, that “numerous studies have revealed a marked decrease in terrorism by self-described Muslims.”

If mainstream media outlets haven’t learned their lesson from 9/11, they certainly haven’t changed their ways after the Charlie Hebdo saga. Pervasive, frenzied coverage crying “terrorism!” managed to overshadow both a massacre of more than 2,000 Nigerians by Boko Haram, as well as dozens of violent attacks against Muslims throughout Europe. However, it was Fox News pundit Jeanine Pirro who completed the circle of hypocrisy when she emphatically bellowed that “we need to kill them” in an unhinged rant to a national television audience of millions. If Pirro were in France, she might very likely be arrested under the country’s hate speech laws, except for the fact that country’s law enforcement is markedly biased against Muslims as well.

Fox isn’t the only news outlet to have dropped the ball. Religious scholar Reza Aslan challenged CNN for its misleading use of the term “Muslim countries” to overemphasize sectarian conflicts, poor human rights conditions, and inequality for women in a narrow subset of countries, presenting them as representative of the entire world of Islam. In an interview with CNN’s Don Lemon and Alisyn Camerota, Aslan gracefully put to shame the anchors’ assertions about the Muslim world:

Camerota: Defenders of Islam insist it is a peaceful religion. Others disagree, and point to the primitive treatment in Muslim countries of women and other minorities.

Aslan: Do you know that Muslims have elected seven women as their heads of states in those Muslim-majority countries?

Lemon: But Reza, be honest though. It’s not a free and open society for women in those states.

Aslan: Well, it’s not in Iran, it’s not in Saudi Arabia, but it certainly is in Indonesia, and Malaysia, and Bangladesh, it certainly is in Turkey… You see the problem is you’re talking about a religion of about one and a half billion people, and it becomes very easy to simply paint them all with a single brush by saying “well, in Saudi Arabia they can’t drive,” and that that’s somehow representative of Islam.

Journalists themselves have even faced more vitriol than the killers they write about simply for writing about a controversial topic. Journalist Rania Khalek faced vile threats and harassment after writing about reactions to American Sniper, a film that glorifies the killing of Arabs and portrays them as “savages.”

Yet when Adam Lanza killed 20 children at Sandy Hook Elementary School in 2012, the media coverage worked to humanize the mass murderer, analyzing his psyche and delving into his troubled childhood. And when James Holmes went into a movie theatre in Aurora, Colo., armed to the teeth with automatic weapons, killed 12 people and injuring 70, he was described sympathetically as a “loner” with “mental health issues.”

Such discrepancies in the characterization of criminal acts across racial and religious lines are sometimes subtle, sometimes overt; however, the continual reinforcement of anti-Muslim bias can create deep-seated resentment waiting to explode.

“The continued and persistent representation in the mass media of Muslims as uncivilized, violent, terrorist animals who hate the West, has contributed to a climate of hate and mistrust, and has caused viewers to come to understand Muslim lives as without positive value and do not matter,” says Amin Husain, professor of Race and Media at the New School in New York City. “This makes killing Muslims permissible, if not excusable.” In this volatile climate, all that’s needed is one spark to incite someone to act out on their received prejudices.

While there’s no way of knowing whether it was Jeanine Pirro’s “we need to kill them!” tirade that pushed Hicks to homicide, the aggregate effect of the incessant reminder that we are constantly under threat of terrorism is itself a form of psychological terrorism.

The New York Police Department’s pattern of targeting Muslim communities with surveillance has been acknowledged as not only unconstitutional but also ineffective at providing America with more security. Like the U.S.’s war on terror, the only thing it accomplished was to sow suspicion and resentment among its citizens.

“In many parts of the Muslim world, the U.S. counterterrorism efforts are perceived as a war on Islam writ large,” says Faiza Patel, co-director of Liberty & National Security Program of the Brennan Center for Justice. “When you start targeting religious behavior, you feed into this notion that the United States, and particularly the FBI and the NYPD are at war with Islam, and that’s what we really shouldn’t be doing.”

Terrorism may be the most important political issue of our time, and when media outlets report on it with a biased slant, they do a grave disservice to the public’s interests and safety. When journalists tip the scales in showing us the wars the U.S. is engaged in around the world, they’re actually putting Americans at home in danger of violence. When extremists take innocent lives, the answer is rarely so simply found in explanations like parking disputes or mental illness.

Sadly, the reality may be closer to the words of the “Woolwich cleaver” Michael Adebolajo: “This is an eye for an eye, a tooth for a tooth. We will never stop fighting you, until you leave us alone.”