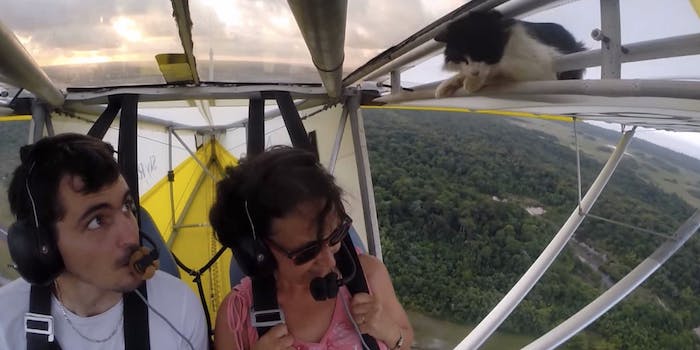 This cat seriously regrets hiding in the wing of a plane

It wasn't prepared for those tailwinds.

If you’re a cat living around the Ultra Léger Motorisé aeronautics club in French Guiana, there’s likely no shortage of nooks and crannies in which to nap. Unfortunately, a few of these can suddenly become airborne.

So it was that one high-flying feline unwittingly found itself a passenger for a quick jaunt in a tiny airplane. It’s hard to say who looks more bewildered by this turn of events—the cat or the pilot.

Sensibly, the cat kept itself stowed in the overhead compartment until the aircraft came to a complete stop. “I still don’t know if it got in after the pre0flight check or if I missed it,” the pilot wrote on YouTube. “The cat is doing well, she is still our mascot.”