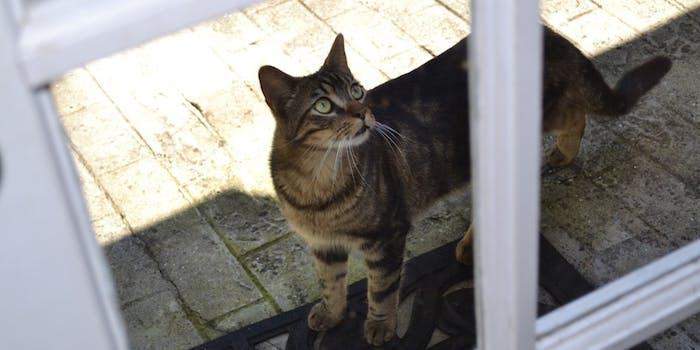 Time to buy some deadbolts, because this cat learned to open doors

Let's hope the next thing he learns to do is knock.

Man once lorded over animal with his opposable thumb. We gripped jar lids, prying them from their containers to enjoy their delicious contents while the lesser mammals watched with envy. We closed doors in their faces so that dogs wouldn’t watch us pee, or cats wouldn’t give us weird looks during lovemaking.

But the day of reckoning has come, for a cat named Mulder has begun the revolution by opening the door to freedom—literally. Redditor ErixTheRed posted a video, claiming that his brother’s cat has learned to open doors.

The video, is both an astounding feline feat and equally terrifying. Not even an added obstacle of a makeshift moat can deter Mulder from clawing onto that handle and busting through the doors. Like a Ninja Warrior competitor, Mulder jumps his way over, avoiding the water and  barging in on whatever activity is occurring.

Time to buy some deadbolts, for no door is safe from Mulder’s ways. Let’s hope he at least learns to knock soon.