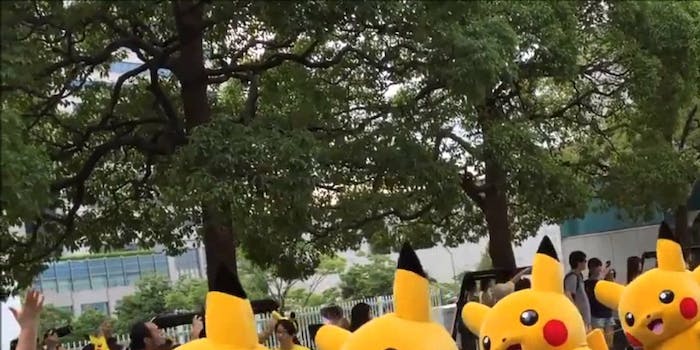 Can fitness and body positivity coexist?

Exercise used to be about molding my body to a shape that I thought would make me acceptable to society. Counting calories, obsessively weighing myself, and pinching my stomach—I’ve been there and done that. It’s exhausting and reduces exercise to a chore or an outlet to express dissatisfaction with my body.

Somewhere along the line I decided that it wasn’t worth it. Stressing over how much I should eat or how many inches I needed to lose only made me feel worse about myself, and I’d rather eat whatever I want and not exercise at all, than try to be “healthy” and hate myself.

Stressing over how much I should eat or how many inches I needed to lose only made me feel worse about myself.

When I started exercising again, I decided that I would do it for stress management and health, not for looks. While I stuck to a schedule and tried to eat as well as I could, I never weighed myself, measured myself, or counted calories. If I had a craving for moose tracks ice cream or McDonald’s fries, I wouldn’t deny myself. If I wanted to miss a day or two of working out because I was too busy, or just too lazy, I’d give myself a break. Since then, working out hasn’t been an obligation; now it’s just something I like to do.

After searching around YouTube, I found a program called Blogilates, a pilates program by California based fitness guru and fashion designer Cassey Ho. I’ve been following Cassey’s workouts for about two years. Her workout videos, set to upbeat music, filmed in Ho’s sunny and colorful home studio, radiate cheerful positivity. They’re fun to do, and if that’s not enough, she also provides her fans with monthly workout calendars, healthy recipes, and her own fitness fashion line.

Among fitness gurus in general, I’d say that Cassey Ho is better than most in terms of body positivity. In several of her videos, she takes time to tell her audience how important it is to appreciate your body for the way that it is. In one blog post from December 2013, she warns readers of the dangers of believing that having a thigh gap will lead to happiness. In April, her video “The Perfect Body” went viral and was praised for criticizing body shaming.

But despite her body positive statements on her blog and in her videos, like most people, Cassey Ho is guilty of the same body shaming that she seems to be against. In a rant about a Thanksgiving episode of Here Comes Honey Boo, she writes:

Fat is just a result of what you haven’t done to take care of your body. Fat will be gone when you begin to eat your veggies, drink your water, and get active! I don’t look at body weight as a measure of someone’s sucess [sic], education, or worth—but just as an indicator of healthiness. In this case, I am worried. I am very very worried for Honey Boo Boo.

Most of the post is dedicated to concern trolling Honey Boo Boo and her family, even going as far as implying that June Shannon is a bad parent who is killing her child. Ho wrote a follow up post addressing the backlash from the Blogilates community, many of whom were upset at her body-shaming tone. She continued expressing concern for the health of Honey Boo Boo’s family and fat people in general, saying: “I am your friend and I am watching out for you. And although it may have sounded mean, it was all in the name of love and health.”

She also justified her concern for the family by quoting the American Medical Association’s declaration that obesity is a disease. However, earlier that year, she wrote, “Declaring obesity as a disease bothers me because it will create a type of victim mentality that can make a patient feel like they are not at fault and that they have something to blame.”

Counting calories, obsessively weighing myself, and pinching my stomach—I’ve been there and done that. It’s exhausting and reduces exercise to a chore or an outlet to express dissatisfaction with my body.

As many writers have explained before, assumptions and unwelcome suggestions about a fat person’s health harm more that they help, and it’s often just a clever way for someone to fat-shame without appearing superficial.

It’s worth noting that when Cassey Ho does speak out about body shaming, it’s in response to comments directed at her own body. Her post about putting too much emphasis on thigh gaps was written in response to fans who noticed her weight gain after she competed in a bikini competition. And the “Perfect Body” video that went viral in April was a reaction to body shaming comments that fans left on her social media pages.

Ho has also been criticized for her fashion designs. She once sold a shirt that said “Muffin Tops are for Muffins Only” and still sells another that reads “Train Like a Beast, Look Like a Beauty.” Bodypop, her activewear line, only has clothing up to size 12. There are other things I could mention about her videos, her encouraging fans to participate in Dietbet, and her recipes for things like Belly Slimming Detox Water.

So, Cassey Ho isn’t as body positive as she would like us to believe. But I don’t blame her, because beauty standards influence every part of our lives, and the fitness industry is a way for people to adhere to those standards. It’s hard to think of a fitness guru, program, or magazine that doesn’t—in one way or another—sell their product by making us feel bad about our bodies. And it’s difficult to think of an instance when people discuss healthy eating or working out in a way that doesn’t emphasize having a fit aesthetic as a goal.

In some ways, I’m just as guilty as Ho. As much as I try to be as body positive as possible, the way I think about myself and others’ bodies is still influenced by body shaming.

Ho has also been criticized for her fashion designs. She once sold a shirt that said “Muffin Tops are for Muffins Only” and still sells another that reads “Train Like a Beast, Look Like a Beauty.”

I’m always looking at how far my belly sticks out in the mirror before I take a shower. I insist on eating whatever I want, but I find myself rationalizing my indulgences (“I can have an extra cookie because I’ll go for a run later”). When I look at people who are larger or smaller than I am, my first instinct is to either make a judgment or begin a thought that starts with the words “I wish.”

When I first started running in January, I would only run in the dark, early in the morning, or late at night, to minimize the number of people who would see my stomach jiggle in my tight fitting workout clothes. It makes me wonder if I really care about my physical and mental health or if that’s just something I say to myself in order to avoid the same stress that I was under when I tried to work out previously.

I’d bet that too many people can’t enjoy the benefits of exercise because they’re worried that their bodies don’t look the part, but there is so much more to exercise than how a body looks. I don’t think it’s impossible to be a fitness guru, or someone who participates in fitness, and be body positive. But in the beauty-obsessed world we live in, we as individuals and as a society are going to have to work at it.

Keziyah Lewis is a feminist and bisexual writer from Florida. She currently lives in Madrid, as she recovers from several years of non-profit work. You can find her on Twitter or on her travel blog.