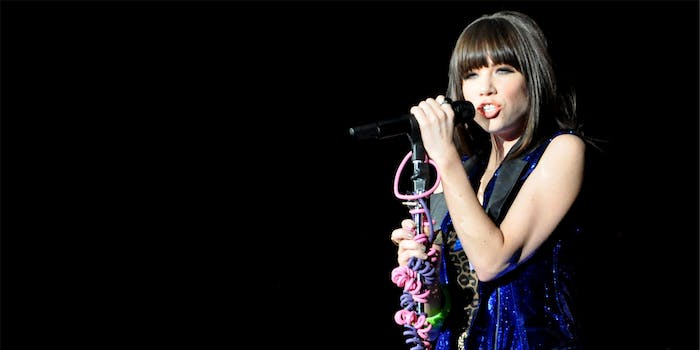 Run away with meme.

After hitting it big in early 2012 with her infectious “Call Me Maybe,” many were skeptical about CRJ’s music career. But the gays have been by her side ever since she cancelled her Boy Scout performance over homophobia in the organization—and championed her severely underrated album Kiss. And despite the goliath challenge she faced in shedding the “Call Me Maybe” image that shoved her into the Internet’s spotlight, Jepsen would emerge victorious. She returned in 2015, with her critically-acclaimed Emotion (which was totally snubbed for this year’s Grammys).

CRJ’s fame was bred out of virality. It consumed radio stations and Internet jokes everywhere, to the point of overkill, which some feared would keep her from truly succeeding in the music industry. But with hit tracks like “Run Away With Me” and “Your Type,” Emotion has gotten the recognition it deserves from diehard fans. Those willing to listen to CRJ even once are effectively turned into disciples as well.

But it was only a matter of time until Carly got swept up in an Internet craze again. It seems her songs are universally awesome Vine backtracks thanks to their poptimist beats and catchy lyrics—especially “Run Away With Me,” which starts with a sultry saxophone solo. Viners have taken clips of various sax players and turned them into an ongoing CRJ homage.

Other Vine remixes feature a similar edit of the track, but their subjects are playing some other musical instrument, or even just singing. That’s how powerful and versatile Christina Aguilera’s voice is.

Still other remixes skip to the banger’s chorus, where CRJ really shows off her vocal abilities. In these Vines, people are getting down in either unexpected or dramatic ways. Drag queens doing flips, for example.

Even Raven Baxter from That’s So Raven and Prancercise legend Joanna Rohrback stand for Carly. Her appeal is limitless.

Meanwhile, some have taken wilder creative liberties. One Vine turns a classic video game sound (from when you come across a Pokémon in wild grass) into the beginning chords of CRJ’s bop. Another Vine uses footage from Jepsen’s performance in Grease: Live as a moment to get that saxophone fired up. Truly meta.

One of the most popular Vines skillfully sound edits the song into a clip of Cartoon Network’s Regular Show, with one of the show’s characters trying to get his friend to listen to Emotion. Yet another remix transforms Ellen DeGeneres and Adele into CRJ believers.

Finally there are adaptations that escape the six-second Vine format. Twitter user dashausofjack posted a huge chain of some of the meme’s best incarnations, including two longer videos. Carly Rae Jepsen retweeted his first tweet, revealing that she knows (and approves) of the meme herself.

Emotion may not have gotten the attention from the establishment that it deserves, but CRJ fans will never give up on the power of Jepsen. And now she can add “Vine muse” to her long list of Internet achievements.