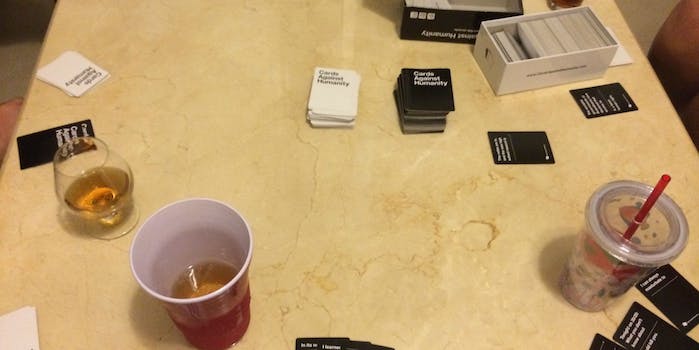 What happens when Cards Against Humanity asks Reddit for ideas?

That's one way to brainstorm.

Consulting Reddit in an AMA session can be a dangerous venture—heavy trolling is possible, and that’s if anybody actually participates at all. When the consulting party is Cards Against Humanity, however, it’s tough to imagine a better medium for a brainstorming session.

Earlier this week, the CAH team announced that they’d be heading to Reddit to take suggestions for new cards and answer questions:

We're doing an IAmA on @reddit tomorrow at noon CST! Get ready to pitch your card ideas – we're making pack together.

The thread brought in over 10,000 comments, which included both questions for the team and pitches for their upcoming World Wide Web Pack, an expansion planned to be constructed entirely from the AMA.

If you’re going to ask the Internet for ideas regarding a game that lives and dies by how offensive it is, Reddit is a community that’s well-suited for the task. As expected, users pitched ideas for some truly wonderful cards, which will showcase their names if they make it into the expansion pack:

Although not quite as fun, the questions far outnumbered the card suggestions. Don’t take that the wrong way, though—there were some great fucking questions.

You can check out the full AMA here. One-hundred percent of the proceeds from the World Wide Web Pack’s sales will be going to the Electronic Frontier Foundation, which the CAH team says will help “to establish the Cards Against Humanity Fund for Boring but Necessary Legal Battles that are Hard to Explain to the Public.”

Over the course of the AMA, more than $150,000 was raised, and that’s from pre-orders. That’s not bad fundraising from an AMA.