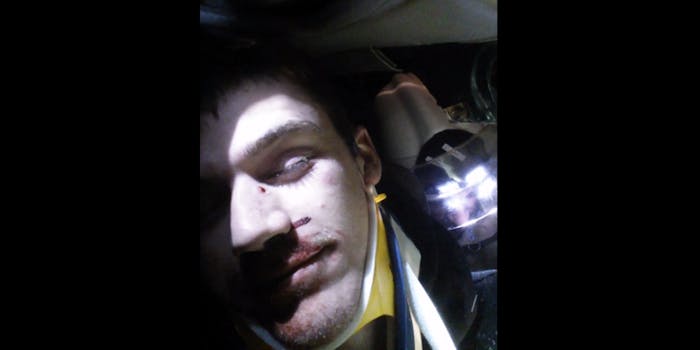 Is this the world's chillest man?

A man in Victoria, British Columbia, who got in a car accident took the chillest possible approach to his rescue, taking a video selfie while rescuers extracted him from the wrecked remains of his car.

In the video, you can see Andrew Mac talking to paramedics and hear machinery in the background. “Shortly after the fire crew arrived I was video taping myself getting cut out of the car,” he wrote in the YouTube video summary. “Jaws of life right behind my head.”

“I’m getting a lot of feeling in my legs now, and it’s f***ing sore,” he says at one point. We’re guessing they at least gave him some pain killers, because no one would be smiling through this ordeal without them.

In the comments section, Mac writes that he broke his right arm, left femur, both kneecaps, and both ankles. But after 14 hours of surgery, some metal plates, and a month in hospital, he went home and is recovering quickly. At least this video proves that he has an upbeat attitude about the whole situation.