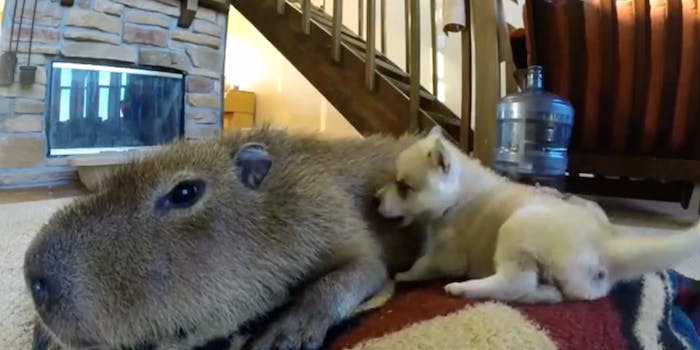 He's either slightly amused, or he's the most patient creature in the animal kingdom.

They’re in the midst of an unlikely friendship.

JoeJoe the Capybara is a bit unusual for his kind. He’s Instagram-famous, for one thing, with more than 33,000 followers watching his every move and his often cute and elaborate outfits. Sometimes he’s just doing what every other capybara would do, and occasionally he’ll go viral after having his fellow cohorts (in the form of cute puppies) climb all over him.

The puppies are at it again, and he either enjoys it immensely or is among the most patient creatures in the animal kingdom. By putting up with a little roughhousing, he’s easily getting free entertainment.

Even when they’re not being caught on film, JoeJoe and the puppies still manage to ham things up.

Photo via JoeJoe The Capybara/YouTube