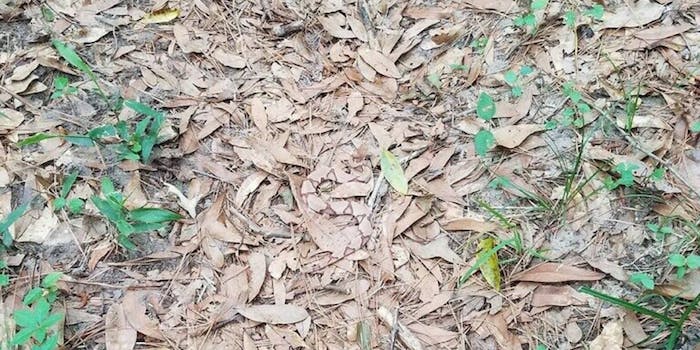 Everyone is losing their minds trying to find this snake

You’ve been cautioned about the snakes in the grass, but perhaps you should be more concerned about the copperhead in the leaves.

A photo of the venomous snake—properly known as Agkistrodon contortrix—hiding in plain sight went viral on Twitter last night, stumping thousands of people. The photo was taken by Jerry Davis somewhere in Texas, and it’s enough to ensure you lace up some Keen’s and pants on your next hike through the hill country.

The tweet has been favorited over 20,000 times. Reactions seemed to alternate between “Help! I can’t find it” and “Help! I’m never going camping again.”

Let me know when you’ve given up.

You’re not going to find it, so here:

Helen, a Ph.D. student at the Florida Institute of Technology, with a focus on boas, pit vipers, and pythons, used the opportunity to teach people some basics about snakes:

And more about the copperhead:

And what to do if actually bitten:

Someone get this into elementary school curriculum ASAP.