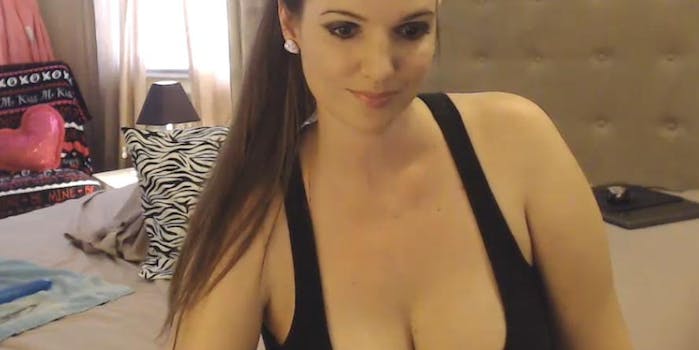 What /b/ didn't realize during the raid on her private show: She was monitoring the thread the whole time.

The entire episode was captured in a video posted on LiveLeak, where it was viewed more than 736,000 times.

“God forgot I existed,” Nina Jaymes said during a 2012 show. “He didn’t provide me with anyone. Twelve years, I’ve been waiting for some man to love me. God doesn’t care. I want to die.”

Now, exactly a year later, Jaymes, 40, has gotten wise and turned two recent raids on her show into profit.

For the second time in the past two days, /b/ has tried hard to rile Jaymes to the point of breaking down. The latest attempt kicked off today at 1:40pm ET. (Warning: The screenshots contain some graphic language.) 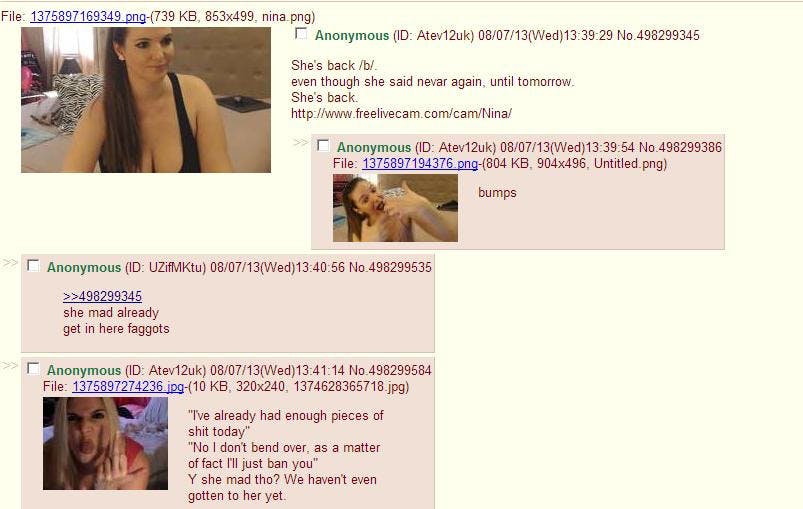 Here are some of the messages posted in the thread; goading /b/ users to mess with Jaymes:

Guys do something. Make her mad so I’ve got something to fap to.

shes already hatin on men come on guys shes getting all riled up pretty quick lets get her screaming.

I want to see the make up run down her face again.

What /b/ didn’t realize was that Jaymes was monitoring the thread. After finishing a private show at around 2:15pm, Jaymes broke her silence. 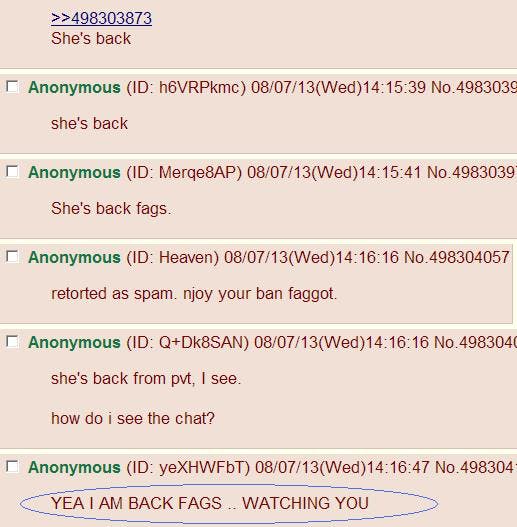 Jaymes continued commenting in the thread, claiming these 4chan raids have only helped line her pockets. Over the course of an hour, she did more than three private chats, collected $15 to flash her breasts and butt quickly, and received a countless number of $1 tips.

“I make plenty of money during your raids, enough to take the next day off,” Jaymes claimed. “Why would i continue to cam if the money was NOT worth it. I would not. Monitoring high school kids is not that exciting for a 40 yr old DOLL!!”

Apparently disappointed by their failure, /b/ turned to cam girls like MilkNyan (NSFW) to try and make her cry. One 4chan user also questioned whether Jaymes was more than just a participant in the /b/ thread.

“Has it occurred to you all that Nina might be making these threads?” the anonymous user wrote. “She seems to ‘find’ them extremely fast don’t you think? When a thread comes up her room gets a sudden raise in viewers from /b/ and that shows on the sites homepage. So people are gonna think this room might be worth entering and in turn she makes more money off the fuckwits that fell for it.”

The /b/ thread was deleted at 2:55pm. Here’s a PDF the Daily Dot created of the entire conversation (much of which is NSFW) before it was taken down.