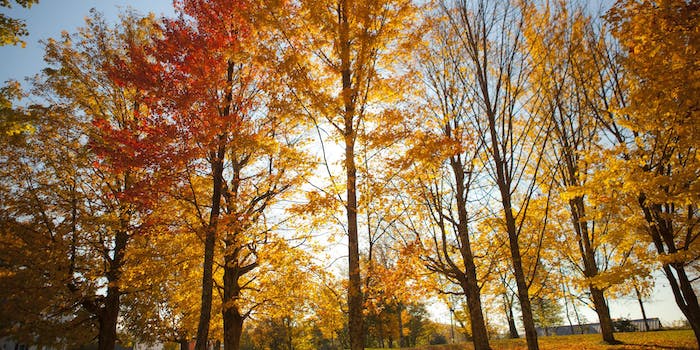 Fall is here, and there’s a company that will mail New England leaves to your house

You better be-leaf it.

Fall foliage is a huge part of autumn in New England, drawing both nature lovers and photography buffs to see the leaves change over the course of several months. There are even leaf-watching driving tours throughout the area. In a bid to profit off of homesick New England ex-pats, one company is offering to give you the foliage experience without making you leaf your home.

Boston entrepreneur Kyle Waring launched Ship Foliage to give everyone a taste of the Northeast’s beautiful fall leaves. For $19.99, you’ll receive three leaves—one red, one yellow, and one green or mixed color—harvested straight from the New England forest. According to the company’s website, the leaves are “carefully picked and color balanced in a bundle of three.”

Waring saw his chance to reach out to an untapped market when he discovered that no other sites sold foliage.

“There are people who want to share some of the foliage with their friends and family, people who have lived in New England and don’t have access to it anymore, leaf-peepers of all types, really,” Waring told the Boston Globe.

Once Waring gathers the leaves, he preserves them with ammonia and glycerin so they’ll last longer than regular leaves before they’re shipped out.

Waring also launched ShipSnowYo.com last year to ship some of Boston’s snow to warmer places that didn’t have it.

Until this year’s fall foliage ends, he’s got some supplies to gather.

On the hunt for the perfect foliage! pic.twitter.com/Fp9MoWvbh6