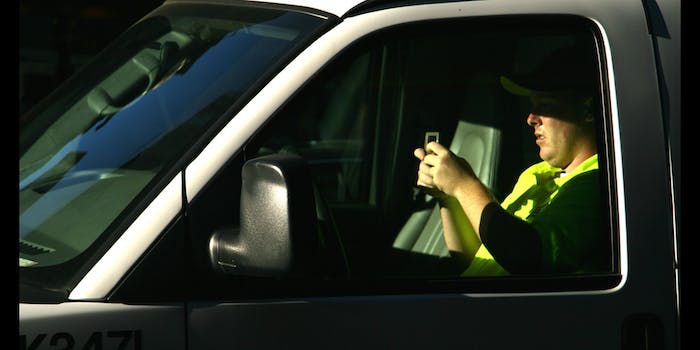 Woman impaled in the butt after texting-while-driving accident

Literally a pain in the ass.

In an age of constant communication, it’s common knowledge that when you text and drive, you put your ass on the line (so to speak). But for Christina Jahnz, it’s a lesson she had to learn quite literally.

The Colorado mother had doubled back to her child’s middle school to drop off a saxophone that her daughter had forgotten at home. “I was running late for a business meeting, so I did a voice text. I looked down to make sure it was all right. The next thing I knew, I was looking up, there was white powder from the air bags deployed,” she told 9 News.

When emergency crews arrived on the scene, they found Jahnz impaled by a guardrail. After the pole pierced the front light of her truck, it entered her thigh and buttocks before continuing into the seat behind her.

Firefighters had to saw through thee front and back end of the pole so that Jahnz could be removed from the wreckage and transported to a local hospital. Though the crash only happened at a mere 20 miles per hour, the injury resulted in a four-day stay in the hospital, with the removal of the guardrail requiring more than 40 stitches.

With the assistance of a walker, Jahnz will be able to walk and is expected to make a full recovery.