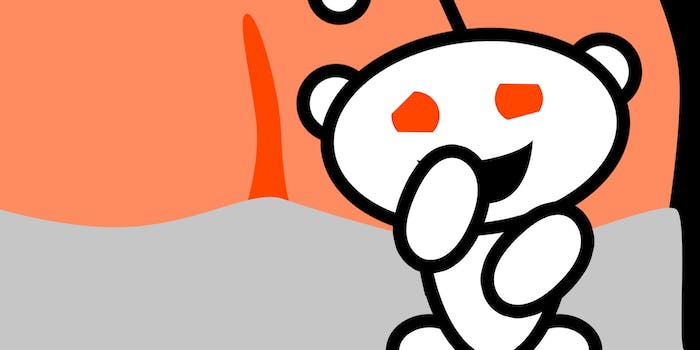 On Monday, redditor poshpink330 posted what looked like a sexy cleavage pic in a ruched bikini top to r/GoneWild, a popular community where women post sexy photos of themselves. “(NSFW) first time poster… Wanna see more? ;-)” she wrote.

“To all of those LOVELY gentlefolk on Gone Wild last night…with love, from ‘Posh’ ;-) ,” she wrote.

Another sent a photo of his visibly aroused crotch with poshpink330’s cleavage on a screen nearby. (This is also kind of normal. It’s a tame version of something Reddit calls “tributing,” which is when a male redditor ejaculates on an X-rated photo submitted by a female redditor.)

One guy drew her a sketch of a panda. (That’s a little weird.)

Here are all her PMs. “Glad everyone loved my husband’s a** crack.” she wrote. “Whether you were frustrated and needed someone to ‘blow your load,’ or if you simply wanted to ‘kiss every inch of it goodnight,’ I’m glad that my husband’s butt gave you the comfort you needed. All 51 of you who pm’d me.”

One guy was so mad after being tricked into looking at man butt that he called her a bitch. Another redditor made a fake account to warn her to delete photos of her face in her user history. “I wouldn’t want you to cross paths with one of the true psychos,” he wrote with a frowny face. “Have fun with your social experiment.”