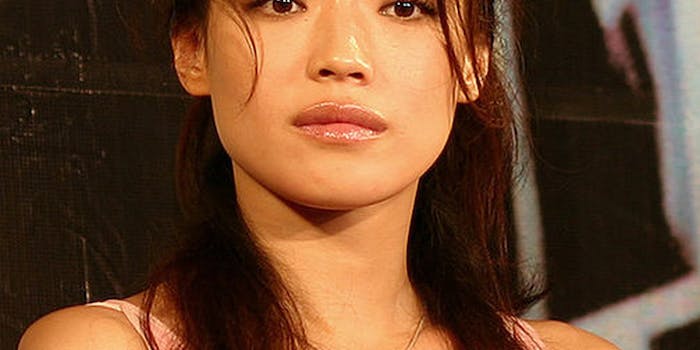 Shu Qi was caught in the crossfire of a feud between two Hong Kong actors.

Western audiences probably know Shu Qi best from her role opposite Jason Statham in the 2002 action movie The Transporter. The actress is a household name in China, where she’s starred in nearly 70 movies over the past 20 years.

Over the weekend the actress stumbled into a heated controversy that has pitted two Hong Kong movie stars against each other and, in the process, sucked in their legions of diehard fans. It’s a war of words on Weibo, and Shu has become the first piece of collateral damage.

The furor began when actor Vincent Zhao was unceremoniously dumped from the set of the much anticipated Hong Kong action film Secret Identity. Rumors swirled that he’d angered the film’s producer Donnie Yen, by behaving arrogantly on set, sporting an entourage of seven or eight people, and frequently missing film times.

Zhao shot back. He claimed the film’s producer and his former co-star, Donnie Yen, was the one who acted unprofessionally, frequently demanding script rewrites and arguing with the crew and director on set.

Yen has now sued Zhao for libel, and the battle has since expanded to factions of Yen fans and Zhao fans, who’ve traded shots across the Chinese Internet. On Monday, Shu made the mistake of taking sides.

“Donnie Yen is dedicated to, and serious about, work,” Shu wrote to her 10 million fans on Sina Weibo, China’s most popular Twitter-like microblogging service.

“He is a good big brother, good actor and good man,” she added, according to AsiaOne.

In no time the actress had deleted her account and disappeared entirely from the service.

Other stars rallied to defend her.

“Those who hurt Shu are pitiful and ridiculous,” Gordon Chan, Hong Kong director and chairman of the Hong Kong Film Awards Association, wrote on his Weibo account. Dozens of other celebrities posted messages supported Shu and denouncing the bullies, including Sina Weibo’s most popular user, Yao Chen, according to Xinhua, China’s state news agency.

Sina Weibo did, however, promise to revise regulations for combatting bullies following Shu’s sudden departure, according to Xinhua. The company also recently switch to a real name only policy, which might also help curb some abuse.

Are better laws the answer? Peking University sociologist Xia Xuelan told Xinhua they’re only part of the solution. “To reduce cyber-bullying, we, the users, must control our behavior, too,” Xia told Xinhua.

If only it were that simple.