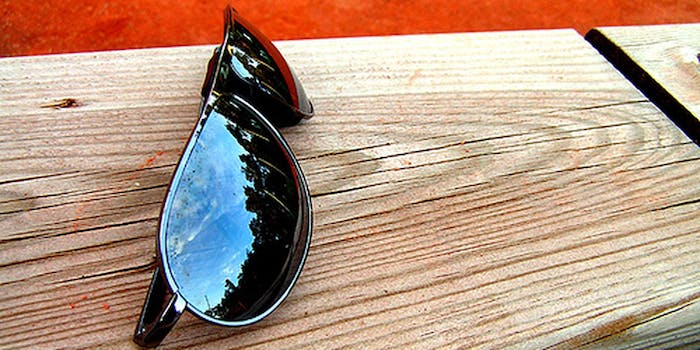 Living without sunglasses can be so annoying. But this bro was even more annoying.

It’s so annoying when one’s time with a significant (or, in this case, not-so-significant) other ends quickly and you realize that there are things from the relationship that you’ll never get back.

Sometimes it’s a piece of your heart and soul. Other times it’s your dignity. Or perhaps it’s your backup toothbrush.

Or maybe, in the case of one unlucky bro, it was a pair of sunglasses.

An Imgur user named phillyalex shared his tale of woe with the world: the year-long journey of a man who simply wants his possession returned. The whirlwind tour of emotions ends with a stunning conclusion that leaves all of us dismayed and disappointed.

Here was the description on Imgur:

Okay, so. Last summer, I met this girl at a bar. We hit it off, I end up going back to her place, whatever. She gives me her number before I leave and I hit her up to hang out again about a week later. I had gone to a football game earlier that day and then later met up with her at a friend’s house before walking to a bar to see a band play. It was a sunny Saturday day game and I was wearing sunglasses, but by the time I met up with her, it’s about 7pm and the sun was going down. So on the way to the bar, I asked her to hold my sunglasses in her purse for me. When we get to the bar, I see a few of my friends and I start introducing her while we order drinks. She turns to me and says she’s going to go outside real quick to make a phone call and she’ll be right back. She never comes back. Which is fine, I wasn’t that into her anyway. But what was not fine was that she left with my sunglasses. So over the past year, I’ve been desperately trying to get my sunglasses back from her with very little success. That was until last week when I finally made a breakthrough… Here it is from the beginning. 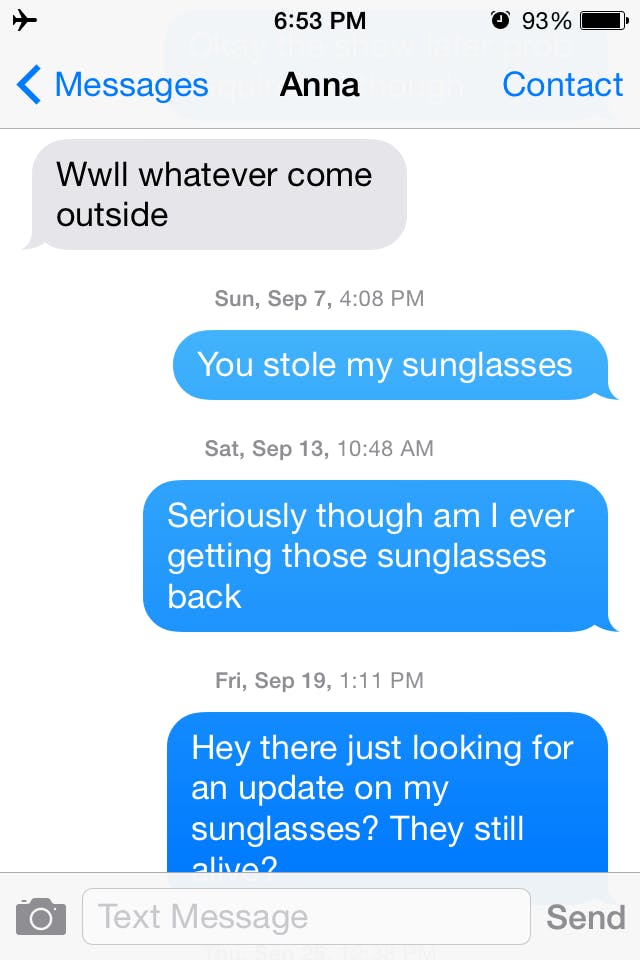 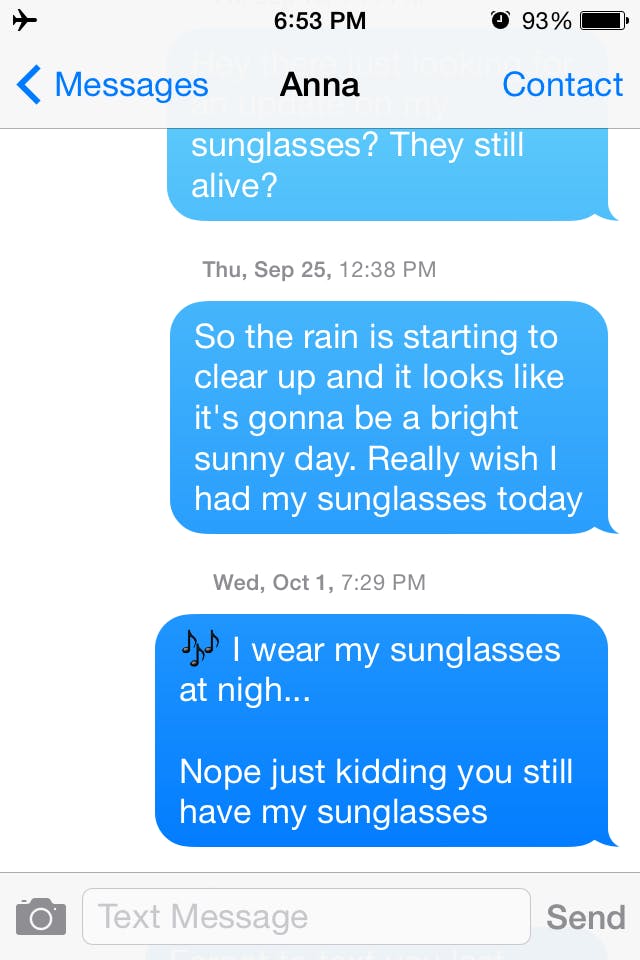 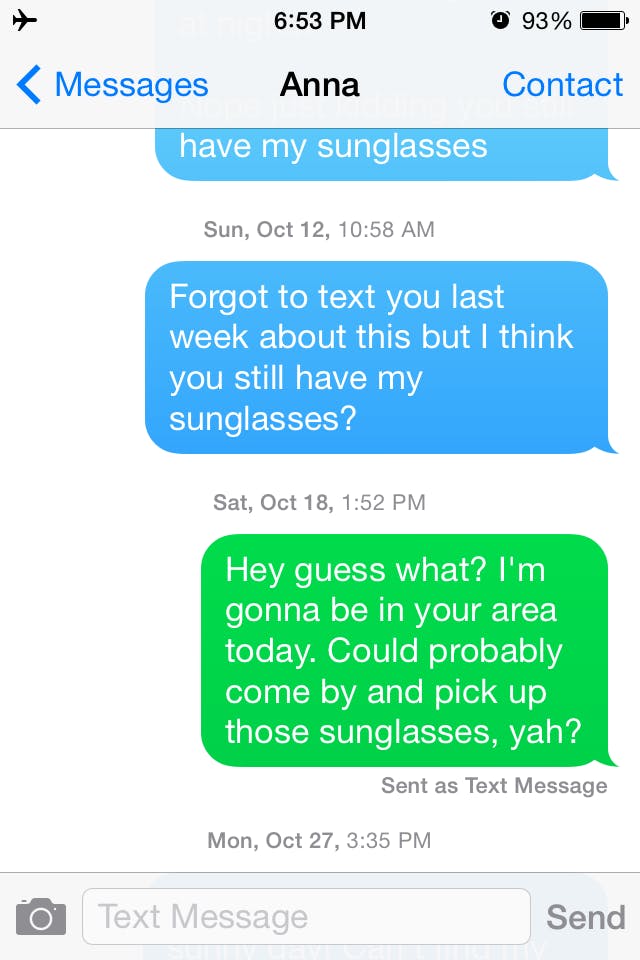 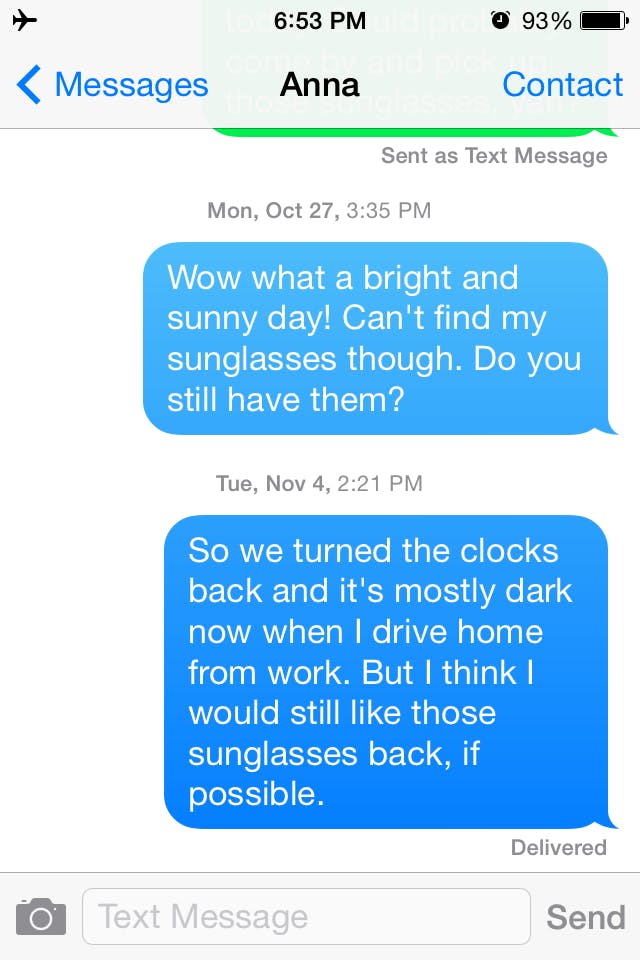 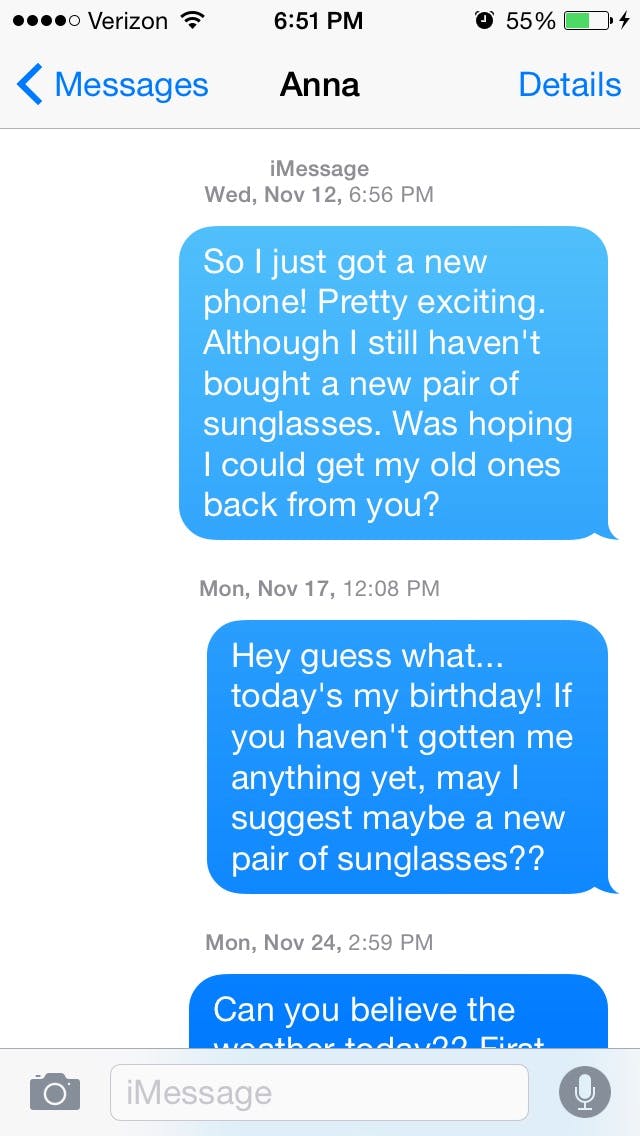 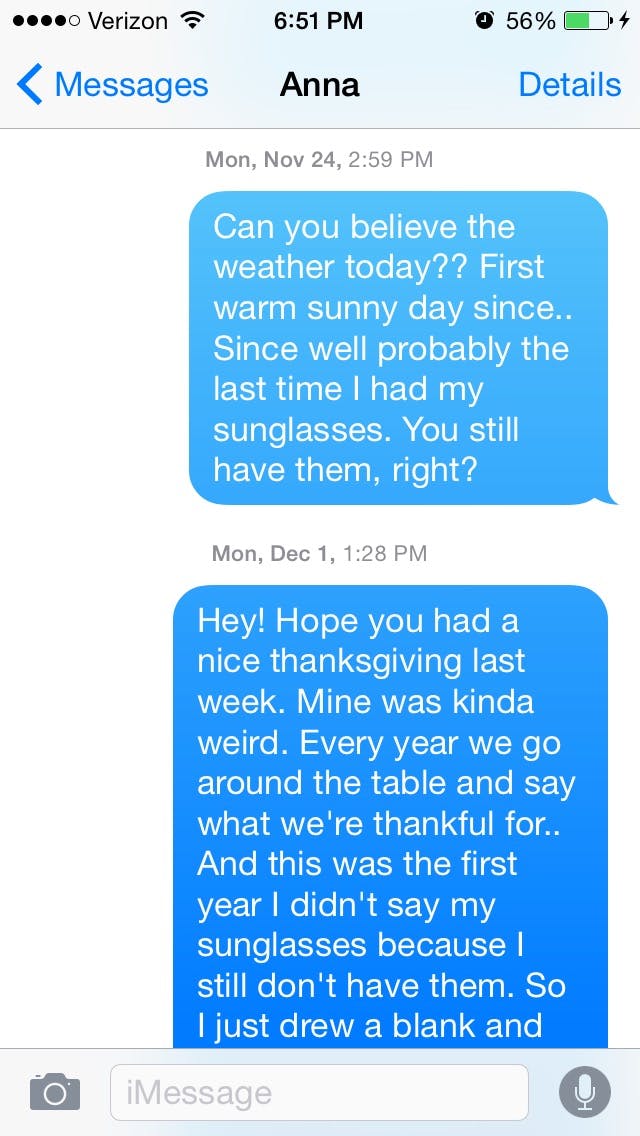 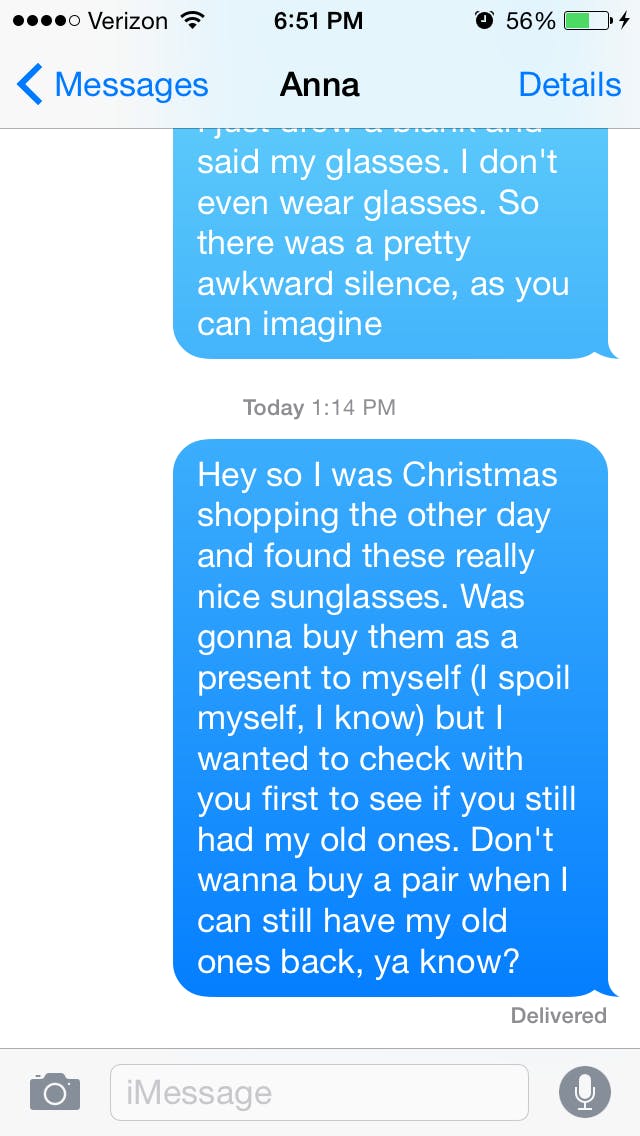 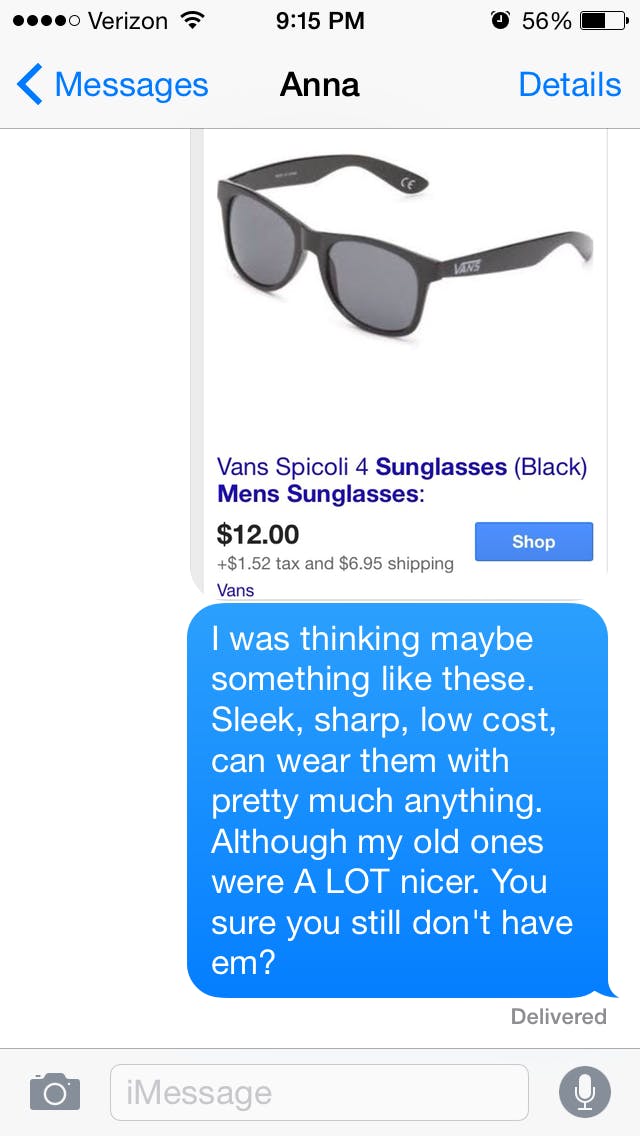 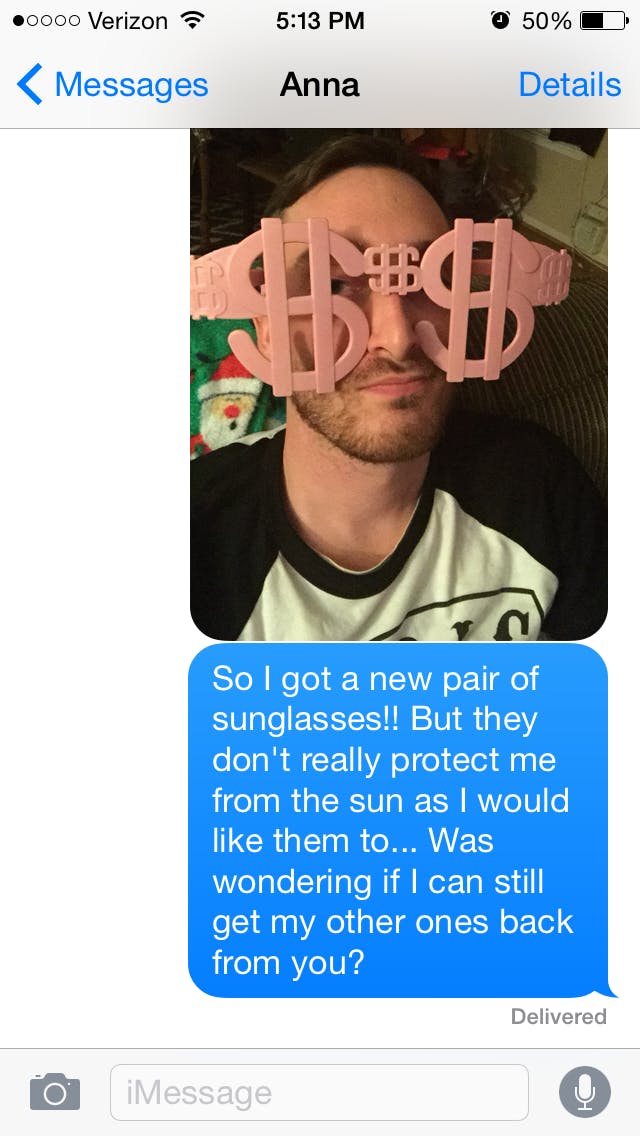 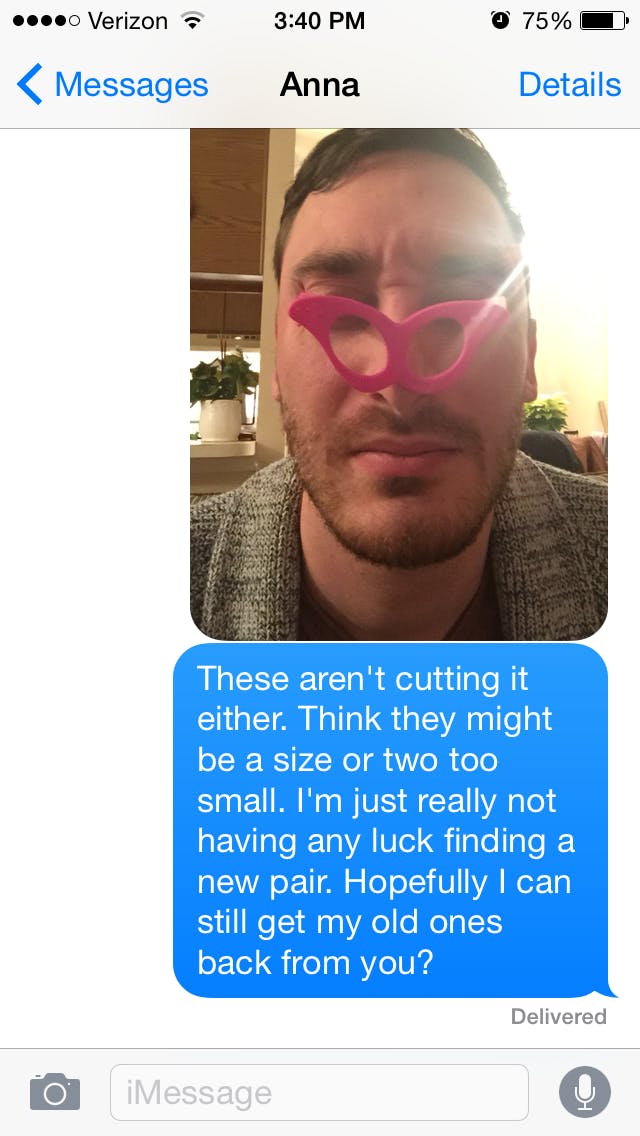 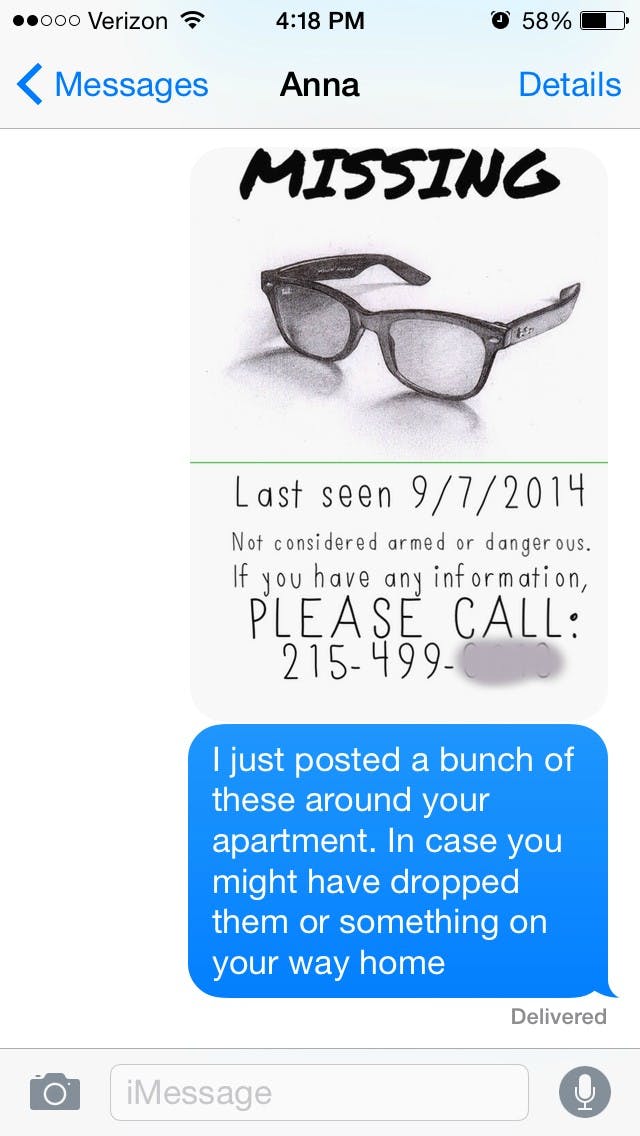 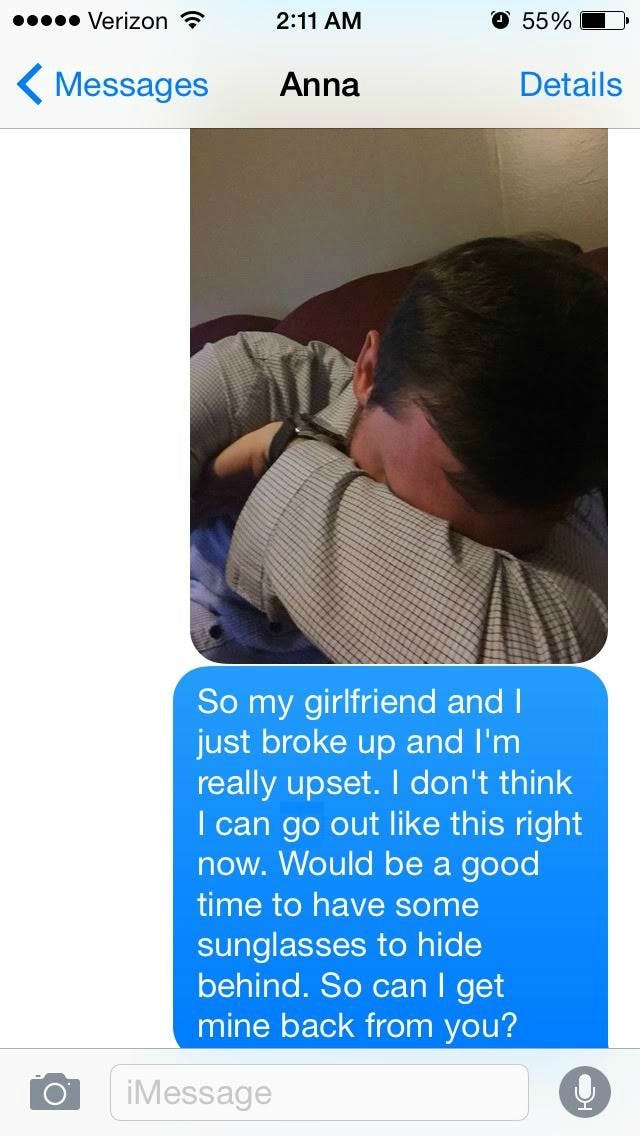 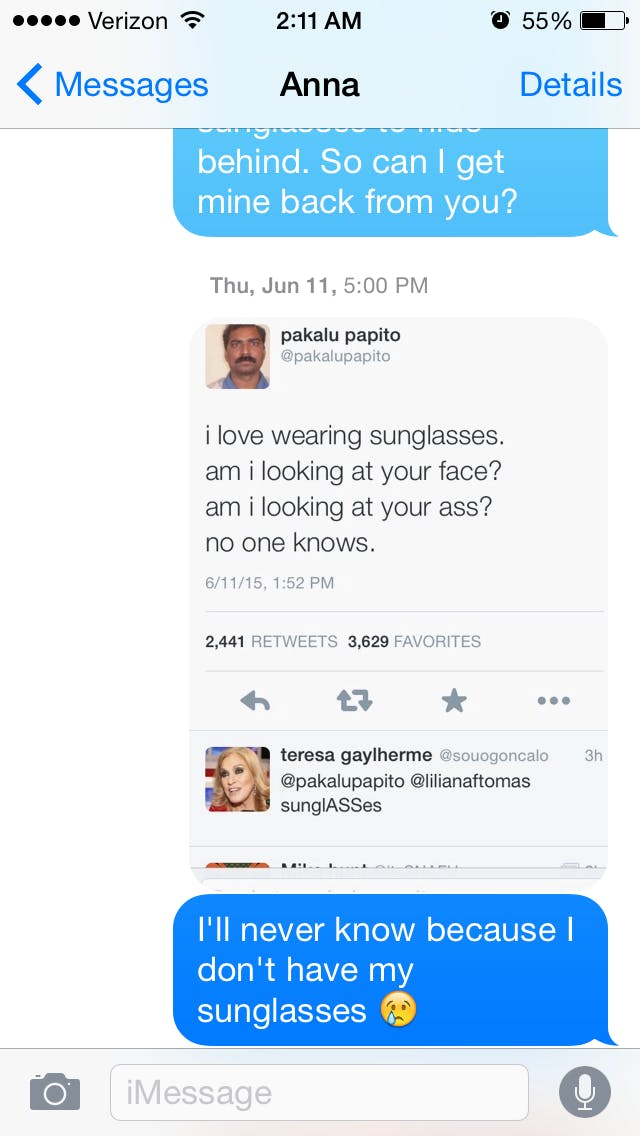 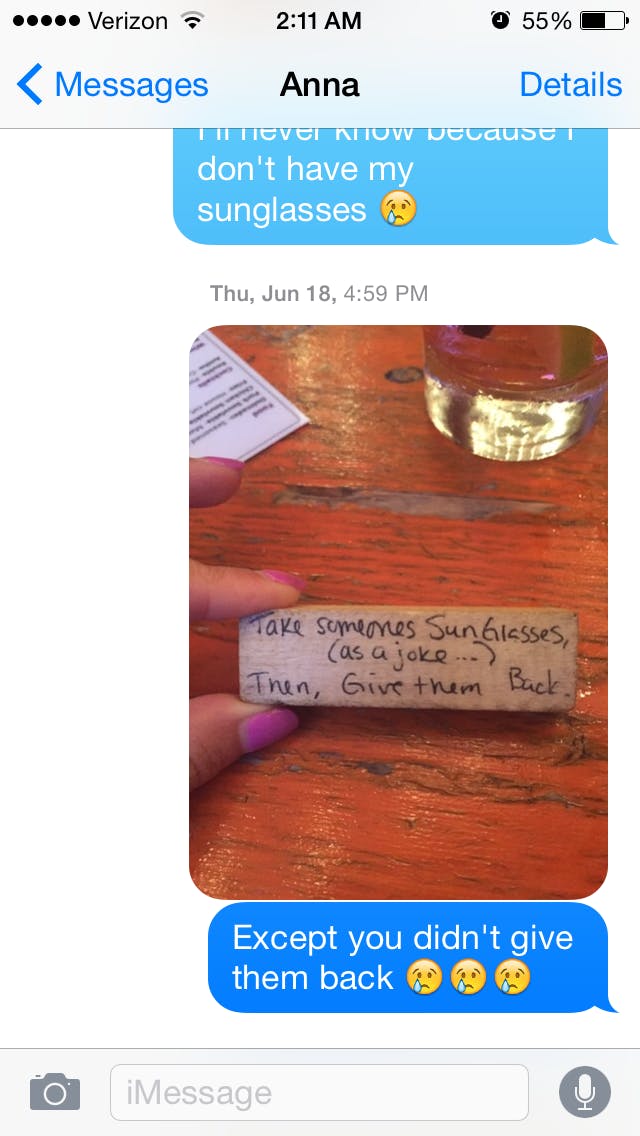 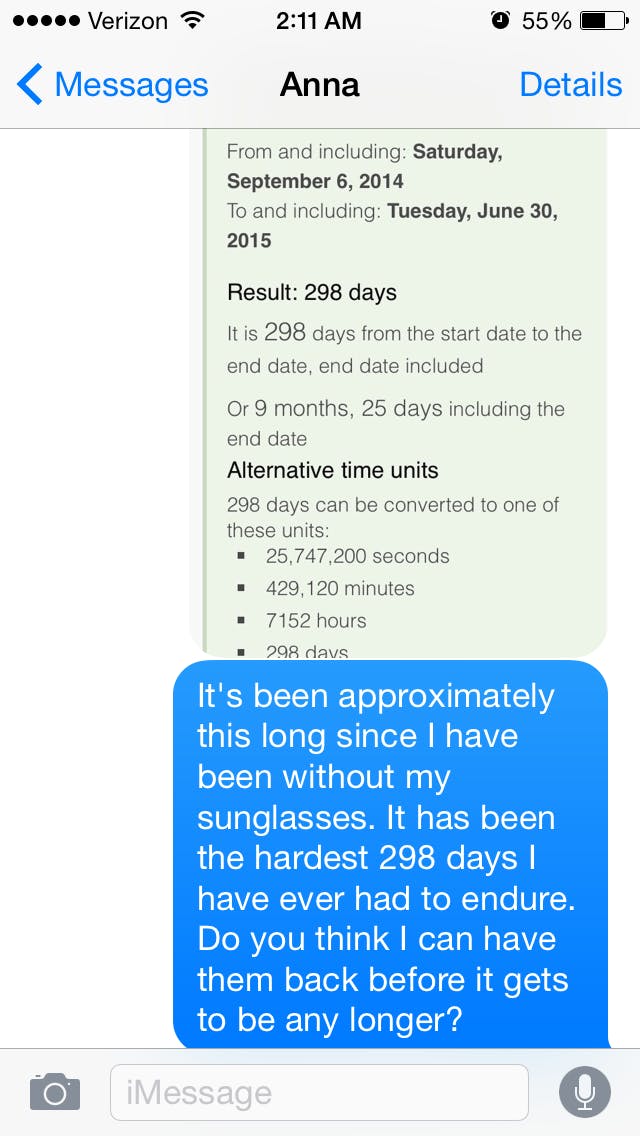 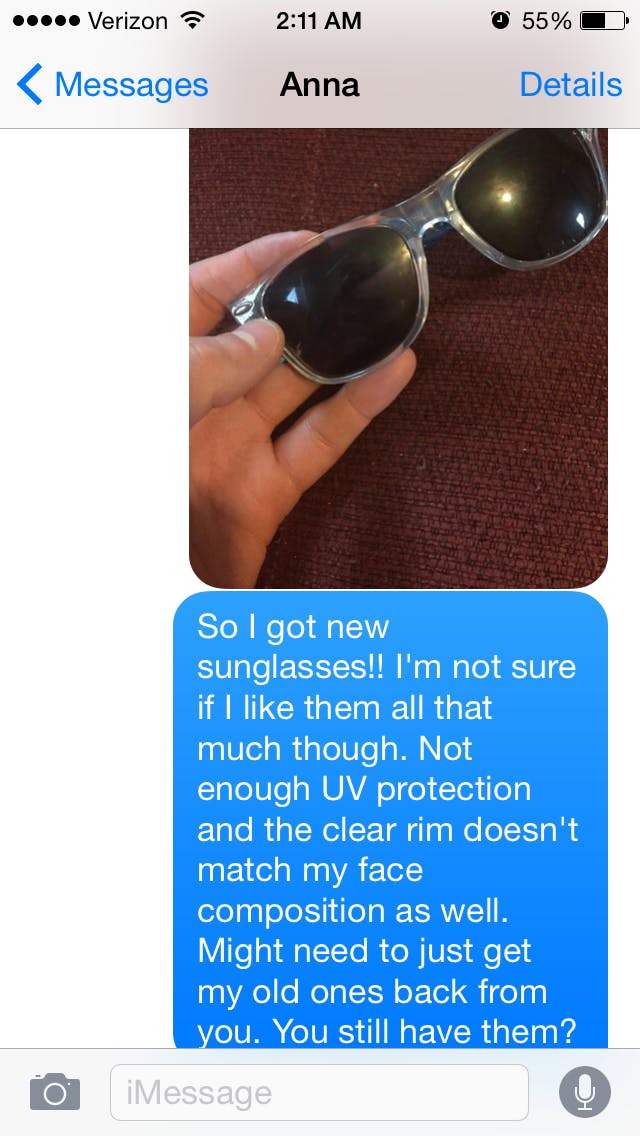 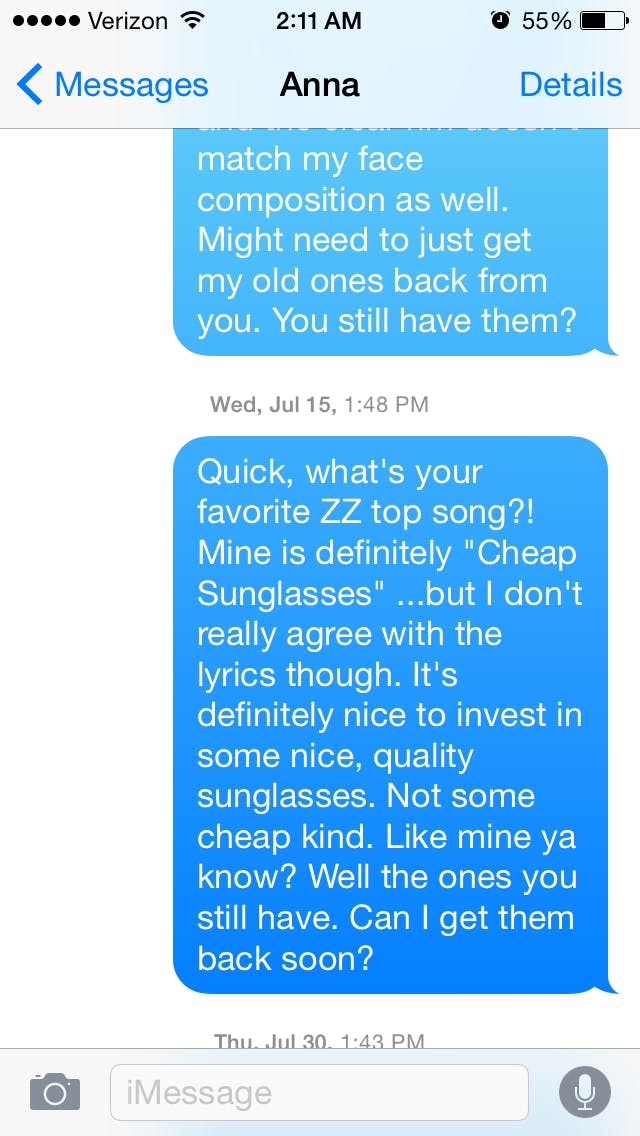 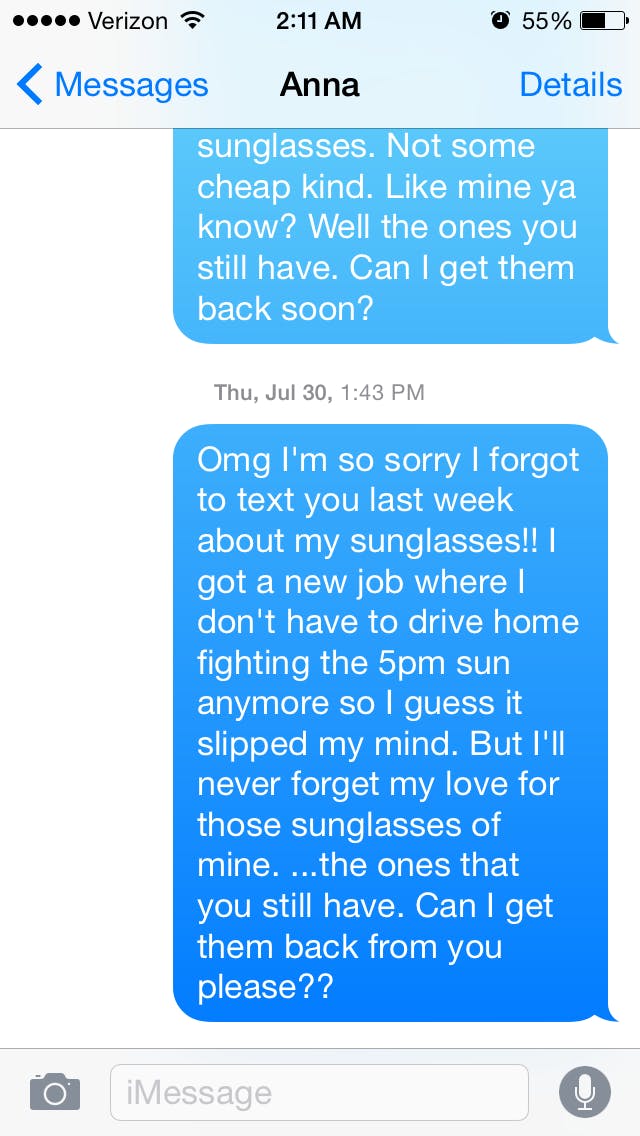 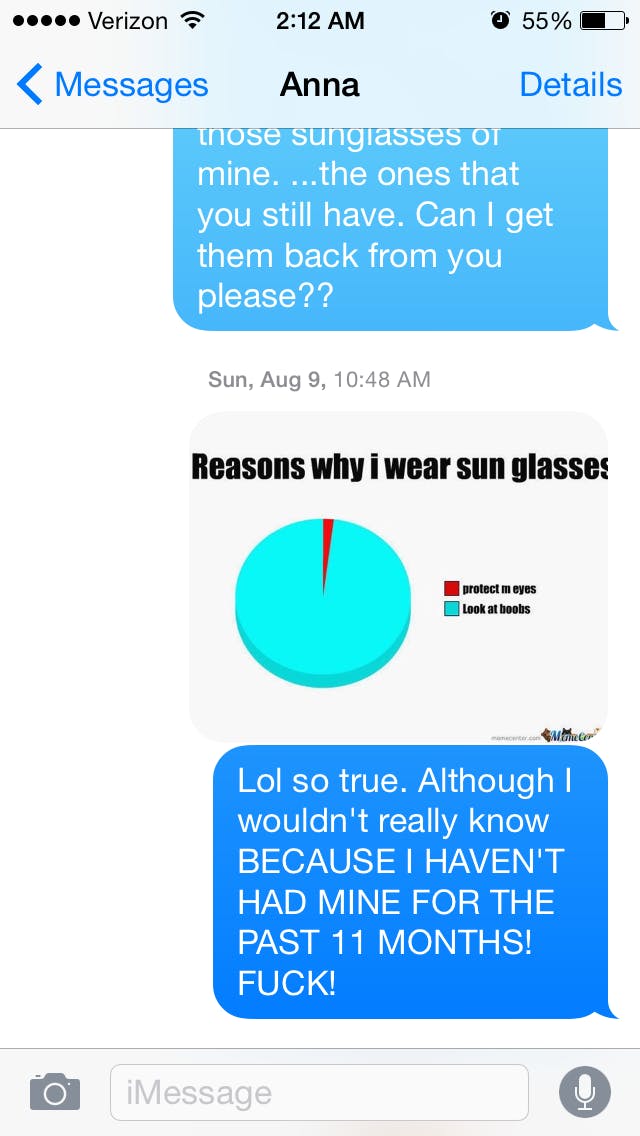 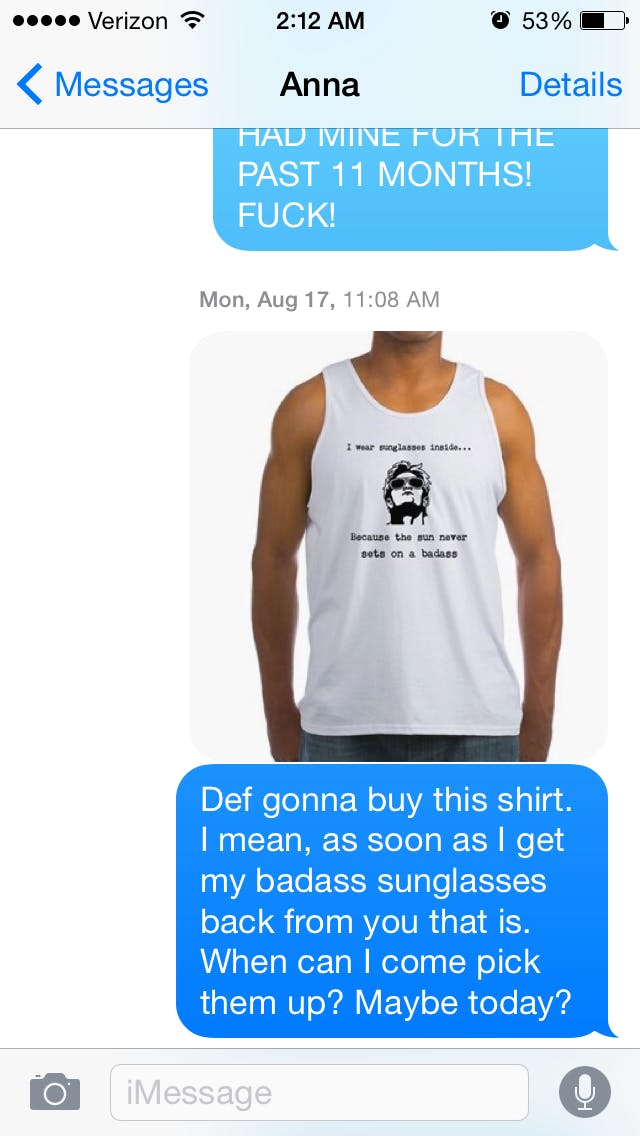 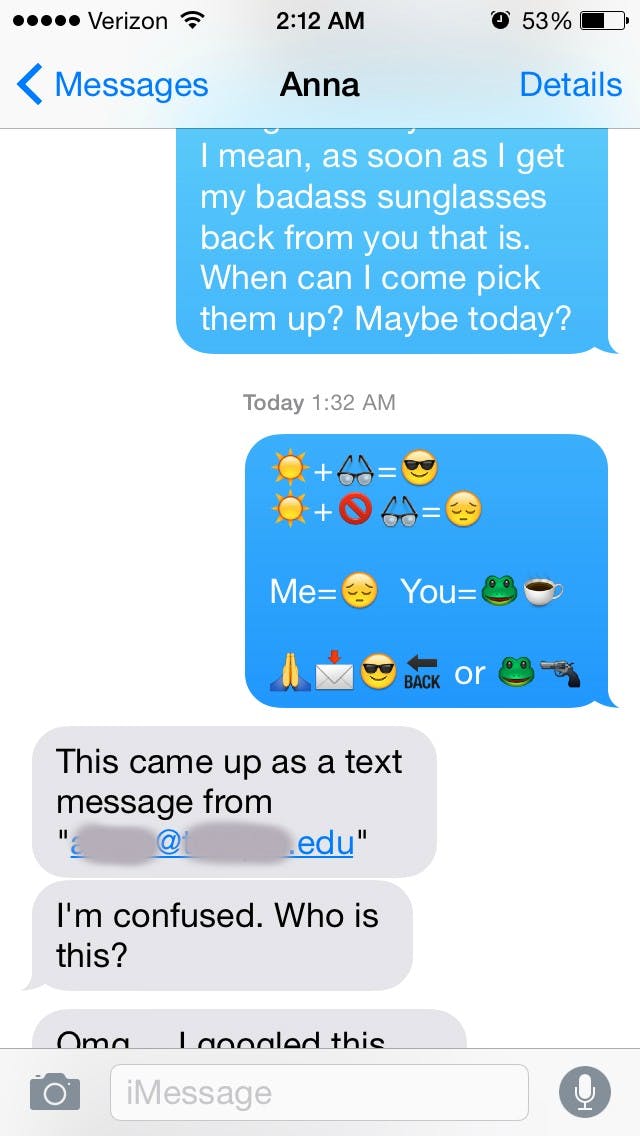 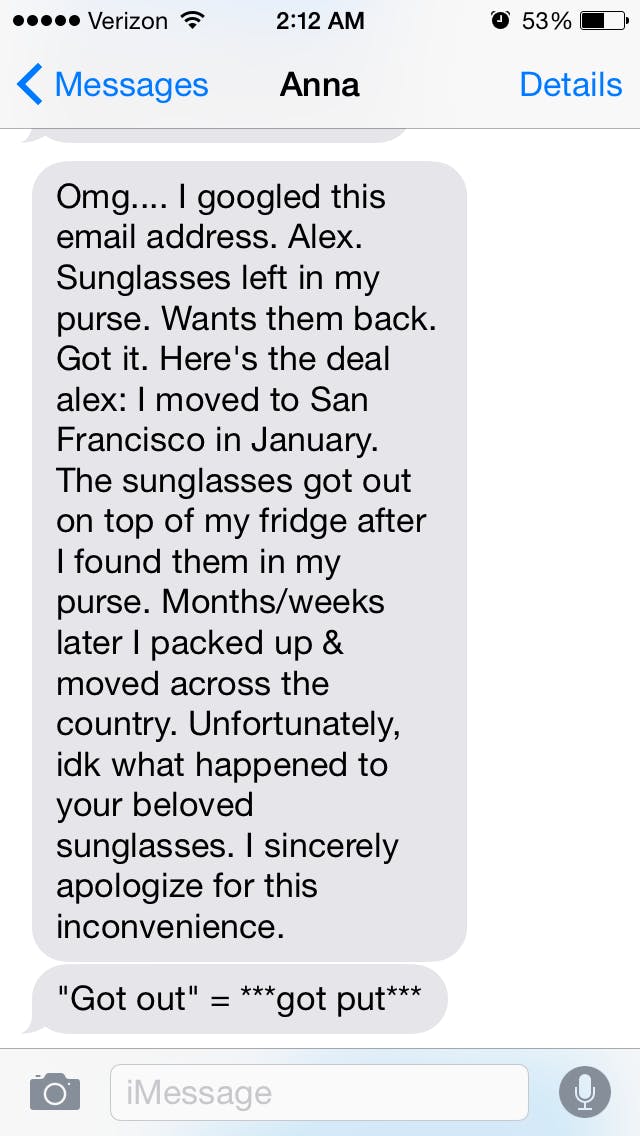 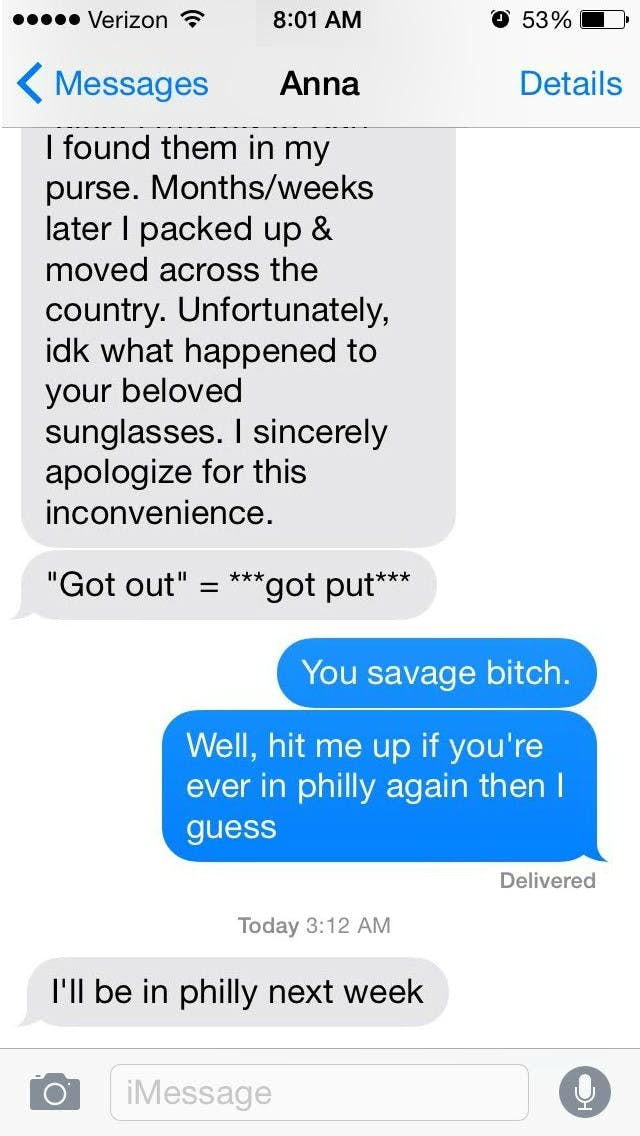 We have to give phillyalex props for his consistency, his refusal to back down, and his sense of humor. But you have to wonder why, after several months of receiving no responses from a woman who he admittedly didn’t know all that well in the first place, he didn’t simply go out to a store and buy another pair of sunglasses.

But at least phillyalex finally heard back from his former paramour. It might not have been the answer for which he was searching, but it was an answer nonetheless.