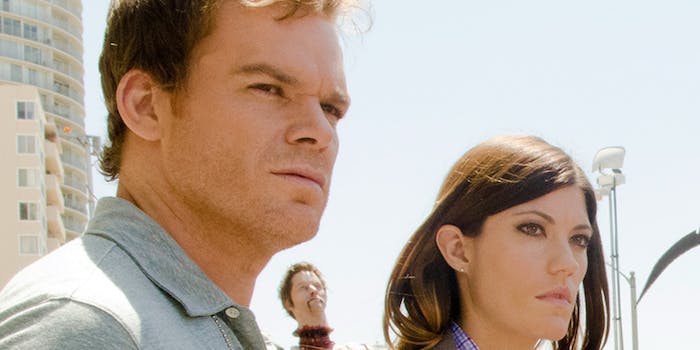 The 17-year-old's mode of murder was patterned after that of the fictional serial killer.

A British teenager who dismembered his 17-year-old girlfriend in a style similar to a fictional serial killer has been sentenced to 25 years in jail.

Steven Miles, then 16, murdered his girlfriend, Elizabeth Thomas, at his family’s Surrey apartment Jan. 24. Miles stabbed Thomas in the head and in the back, then used a disposal method he’d seen on the Showtime series Dexter many times.

Using saws he borrowed from his father’s tree surgery business, Miles dismembered Thomas’s body, then wrapped her arms, legs, and torso with cling film and put them into trash bags.

Unlike Dexter, however, Miles didn’t hide the pieces, but instead told his sister when she arrived home to their Oxted flat that his alter-ego, “Ed,” had “made me do something bad.”

The murder took place just three months after Miles had been discharged from a mental health institute, where he had been perceived as making progress.

Miles had previously told his family that Ed was a voice in his head urging him to kill. Despite this, a team of psychiatrists ruled that his claim to have schizophrenia was false.

He also had attempted to strangle a previous girlfriend and described to her how he might commit murder, according to police. Prosecutor Philip Bennetts told jurors at Miles’ trial that he had a fascination with horror movies and in particular Dexter, a popular show about a crime-solving blood spatter expert who’s also a serial killer.

According to police, Miles had occasionally described his victim as his “project.”

He pleaded guilty at on Sept. 9 at Guildford Crown Court in Surrey.

Judge Christopher Critchlow stopped just shy of ordering Miles to serve a life term due to his age. His sentence is 25 years to life.